Garbage being dumped beside some donation bins in Toronto 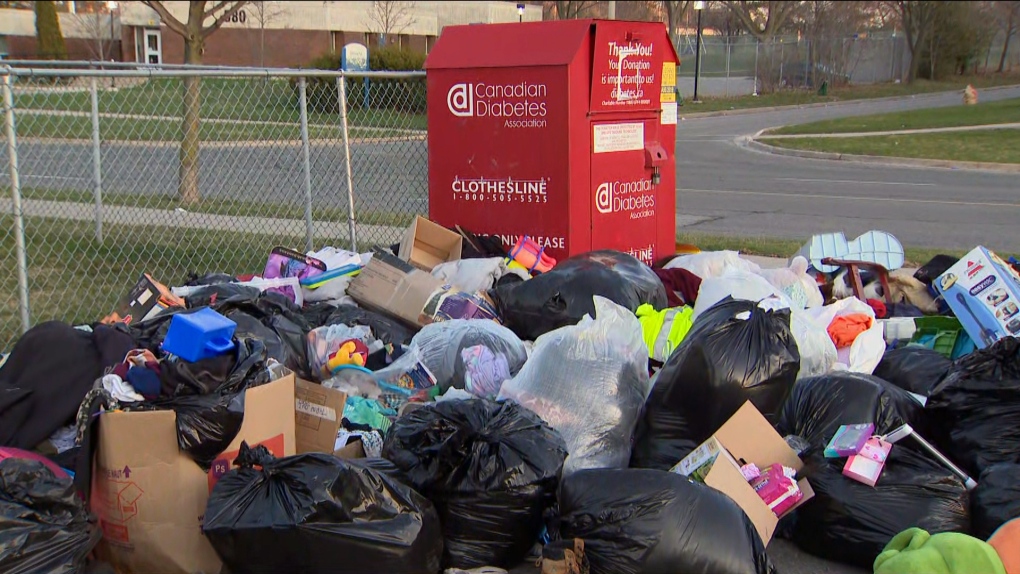 Garbage bags are seen near a clothing donation bin in Toronto on April 7, 2020. (CTV News Toronto)

TORONTO -- Some residents have resorted to illegally dumping their garbage beside overflowing donations bins across the city, prompting at least one charity to release an open letter calling for an end to the practice.

In an open letter released on Monday, Diabetes Canada said that it suspended the pick-up of all textile donations from homes and community bins on March 23 but has nonetheless continued to see residents drop off donations and even garbage at the sites.

“Sadly, some residents continue to drop off donations at our bins even though we cannot empty them at this time; and some individuals are using Diabetes Canada donation bins to dump garbage and more,” the letter states. “This is posing a serious health and safety issue. We have contacted government agencies to help us to remove the garbage however we have not yet been successful.”

Diabetes Canada said that it had to temporarily lay off 500 staff who manage its donation bin service, meaning that it does not have employees or the financial resources to clean the garbage around its bins.

One of those bins, located near Renforth Road and Rathburn Drive, was filled beyond capacity on Tuesday morning when CP24 visited the site with hundreds of items stacked up on the ground surrounding it.

In an interview with CP24, Mayor John Tory said that he has been “staggered” by the reports of widespread dumping at sites operated by charities that provide an important service.

Tory said that he believes some of the people dumping trash at the sites may be doing so because they are producing more garbage now that they are home and have filled up their own bins. He said that for that reason he has asked staff about the feasibility of allowing residents to put out extra garbage for pickup at no extra cost, at least on a temporary basis.

“It is just not right. We are in an emergency here,” he said of the situation with the Diabetes Canada bins.