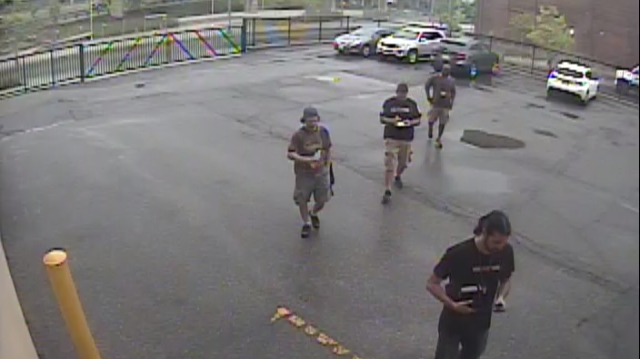 Security cameras captured the four officers on their way into the storage locker facility to carry out a search warrant. (Submitted by Kim Schofield)

Four Peel police officers have been charged with theft and perjury, in connection to the execution of a search warrant in 2014.

The warrant allowed police to search a storage locker leased by 35-year-old Lowell Somerville of Brampton, who was at the centre of a drug investigation.

During his trial for a number of drug-related charges, Somerville alleged that the officers stole some of his property during that search and then allegedly lied about it in court.

One of the items the officers allegedly stole was a “one of a kind”, metre-long wooden sculpture of Tony Mantana -- the lead character in the 1983 film Scarface.

After security footage played during the trial showed four officers entering a storage locker and carrying out a bulky object, the court judge decided to stay the charges against Somerville.

“It is only by permanently stopping these proceedings through a stay that the court can effectively distance the justice system from this gross and continuing misconduct,” the judgement said.

He also alleged that more valuable objects were missing, including $25,000 in cash and expensive jewelry, but Woolcombe determined there was not enough evidence to show the officers had taken those items.

“Upon learning about the ruling, I immediately ordered an internal investigation to be conducted by our Professional Standards Bureau into the conduct and actions of the involved officers,” Peel Police Chief Jennifer Evans said in a statement. “Our officers are held to a high standard in order to maintain the trust that we have worked so hard to build with our community.”

Sergeant Manuel Pinheiro, Constable Richard Rerrie, Constable Damian Savino, and Constable Mihai Muresan, have all been charged with one count of theft under $5,000, one count of obstruction, and two counts of perjury.

All four officers are suspended with pay in accordance with terms of the Police Services Act.

They are scheduled to appear in court on June 4.