Ford weighs future use of AstraZeneca vaccine in Ontario for those under 55 after P.E.I. suspends shots

TORONTO -- Less than an hour after health officials in Prince Edward Island announced they would suspend the use of the AstraZeneca COVID-19 vaccine in people under the age of 55, Premier Doug Ford said he wouldn’t flinch in doing the same for Ontario.

“I won't hesitate to cancel that in half a heart beat, if it's going to put anyone in harm,” Ford said during a news conference in Niagara Falls on Monday.

A senior government source would later tell CTV News that Canada's National Advisory Committee on Immunization (NACI) will recommend pausing administration of the AstraZeneca coronavirus vaccine to those under the age of 55.

Though the recommendation has not yet been made official, Manitoba and Quebec have also announced that they are halting vaccinations using the shot for anyone under 55.

The reason behind NACI’s new recommendation is unclear.

Earlier this month, Canada stopped using the shot in seniors following reports of blood clots in recipients in Europe.

The European Medicines Agency (EMA) declared in a review that it found no evidence the AstraZeneca shot raises the overall risk of blood clots and NACI then reversed its recommendation.

Ford acknowledged those reports and said that he will continue to follow the federal government’s advice on the shot’s safety.

“The guidance from the federal government is it is safe for people over 55,” Ford said.

In Ontario, the shot is currently only available to those over the age of 60.

“It’s important for everyone, when it’s their turn, to get a vaccine because the more people that get vaccines, the sooner we’ll be able to go back to a more normal life for everyone,” Elliott said from the Toronto pharmacy where she got the shot.

Last week, Elliott announced she would get the AstraZeneca vaccine on camera to encourage others to do so while nothing that there is “a lot” of vaccine hesitancy surrounding the shot due to the aforementioned reports about clots.

“I received the AstraZeneca today, and I would certainly want everyone who can receive any one of the vaccines, at the appropriate time, to do so,” Elliott said. 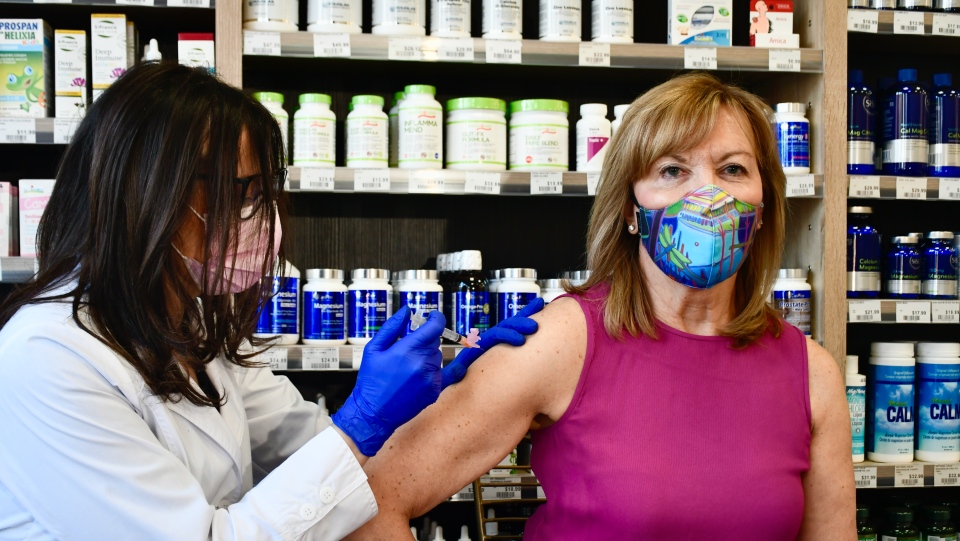 AstraZeneca is one of four COVID-19 vaccines approved by Health Canada. The Pfizer-BioNTech, Moderna, and Johnson & Johnson shots have also been given the green light, though the last of which is not yet available in Ontario.

The province began vaccinating people against COVID-19 in December and has administered 2,031,735 doses since then.

At least 311,248 residents have recieved both their first and second shots and are considered to be fully vaccinated by the Ministry of Health.