Ford thanks Scheer as federal Conservative leader steps down

TORONTO -- Ontario Premier Doug Ford says he wishes Andrew Scheer all the best after the federal Conservative leader announced he is resigning.

Ford is thanking Scheer for his service as head of the official Opposition and federal party leader.

I wish Andrew Scheer all the best as he undertakes this new chapter in his life, and thank him for his service as the head of Her Majesty’s Loyal Opposition and leader of the Conservative Party. (Full statement below). #cdnpoli pic.twitter.com/o99XrROmyc

Scheer announced today he is stepping down as Conservative leader as soon as a successor can be chosen, though he will stay on as an MP.

His party lost the election to the Liberals less than two months ago, and since then there have been many calls for him to step down as leader.

The election also saw Scheer take great pains to distance himself from Ford, declining to appear with the premier during the campaign and rarely even uttering his name. 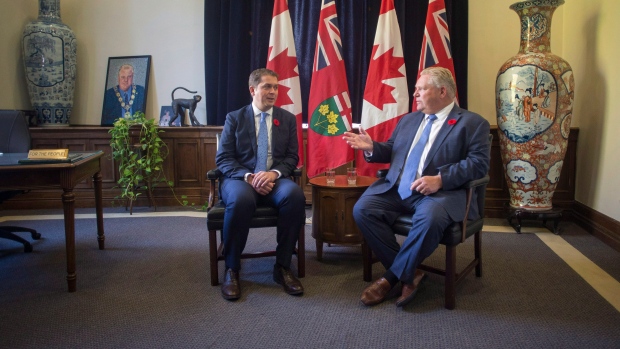 Ford's own popularity has declined sharply since he won a majority government last year.

This report by The Canadian Press was first published Dec. 12, 2019.