The Quebec government unveiled new legislation on Thursday that would create a 50 metre buffer zone around hospitals, schools, daycares and COVID-19 testing and vaccination centres, with hefty fines for those who protest within those boundaries.

Quebec Premier Francois Legault said the temporary measure would allow police to issue fines of up to $10,000 for breaching the buffer zone or for threatening and harassing employees.

While Ontario Premier Doug Ford has denounced these types of protests as "selfish, cowardly and reckless" his government indicated that it is not considering legislation to restrict the rights of protesters from encroaching on hospital property.

"We are confident law enforcement have the resources and tools they need," said Ivana Yelich, a spokesperson for Premier Ford when asked whether the Ontario government was planning legislation similar to Quebec.

"We will continue to monitor the situation in the event more support is required."

The Ontario NDP, however, is planning to table legislation when politicians return to Queen’s Park in October that would create safety zones around small businesses and hospital to prevent employees from being harassed over public health measures. 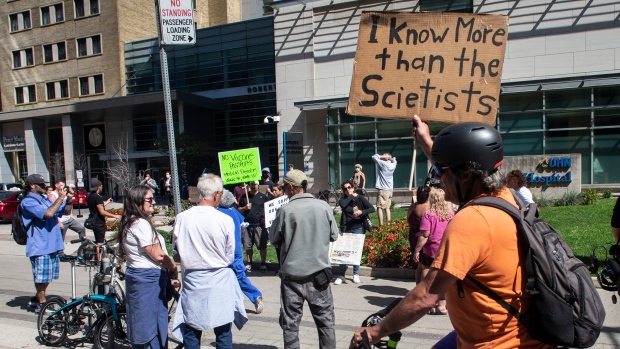 NDP Leader Andrea Horwath said her party’s legislation would make it a provincial offense to breach the safety zone, with fines of up to $25,000.

Asked whether the Ford government would support legislation from the Official Opposition, Yelich said the Progressive Conservatives would "certainly review it."

"To date, the opposition has not provided us with any proposed legislation."

The legislature resumes on Oct 4.