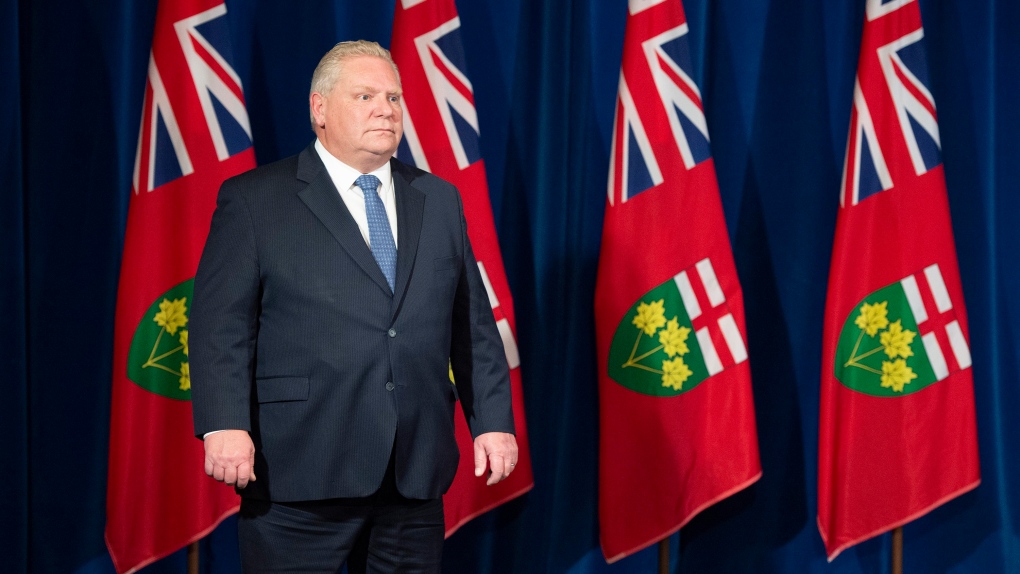 TORONTO -- Ontario Premier Doug Ford and Finance Minister Rod Phillips were forced to give up a portion of their salary after failing to deliver the 2020 budget on time because of the COVID-19 pandemic.

The revelation was made by the premier on Monday, months after Ford returned thousands of dollars to the Ontario treasury — a legal requirement for missing the budget deadline.

"I haven’t told anyone any of this … I know it's not much, it's peanuts but I gave back $10,000 of my salary, 10 per cent of my MPP salary, along with the minister of finance," Ford said during a press conference at Queen's Park. "I haven’t advertised that. We did it months ago."

Ford's charitable characterization, however, was quickly clarified by the Premier's Office, which confirmed that the premier and Phillips had no choice but to forfeit a portion of their salaries.

During the 2019 budget the Progressive Conservative government legislated specific times of the year for when financial statements — such as a budget or economic update — could be delivered.

Missing those deadlines, the law stated, would result in an automatic penalty of 10 per cent of the ministerial top up — $9,240 for Premier Ford and $4,930 for Finance Minister Phillips.

The move was billed as a "one of a kind" initiative in the country designed to bring transparency and personal responsibility to the province’s books.

Oh, this wasn't a donation - this was a penalty.

The government missed delivering the budget on time, because of COVID-19, and under the laws passed by the Ford government -- the premier and finance minister had to pay 10% of their ministerial salary. #onpoli https://t.co/uTvEQt5Z42 pic.twitter.com/YZhyVjvnXE

While the government planned on delivering a budget on March 31, COVID-19 forced the province into a lockdown and subsequently scrapped plans for a fiscal planning document.

Instead, Phillips tabled an economic update and promised a full budget would be delivered in early November — requiring both Ford and Phillips to return significant sums of their salaries back to taxpayers.

Ontario's COVID-19 cases in schools, child-care centres as of Nov. 24