TORONTO -- Despite a stay-at-home order issued in Ontario, people are on the move in and out of the province.

Flights are taking off and landing in Toronto every day, carrying some passengers infected with COVID-19.

“It travels between the air and people, and it travels from place to place in airplanes. Air travel has been a serious contributor to the global spread. In fact, you could argue without air travel we wouldn’t have a pandemic,” said Univeristy of Toronto Infection Control Epidemiologist, Colin Furness in an interview with CTV News Toronto.

Air traffic is way down at Pearson International Airport. The Greater Toronto Airports Authority says it sees about 150 arriving and departing flights per day compared to 1,300 in 2019. This includes cargo flights carrying personal protective equipment and medical supplies, along with passenger flights, many of which are partially filled.

Still, between Mar. 31 and Apr. 11 travellers with COVID-19 have taken domestic flights into Toronto where no quarantine rules are in place.

Data  pulled from the federal government’s website detailing flights with exposures shows there were 18 exposures on 18 flights. Six of them from Vancouver, with Ottawa, Edmonton, Calgary also on the list. 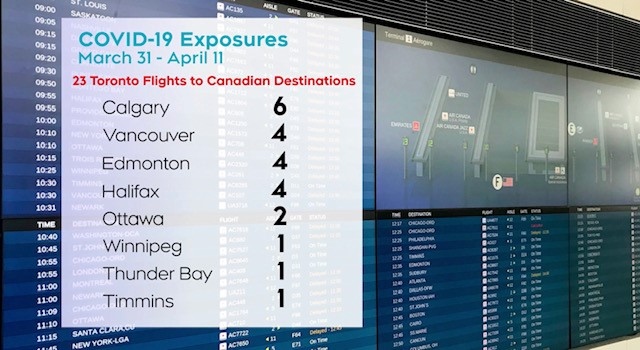 People infected in Toronto are also flying to other Canadian destinations. Twenty-three flights were listed with exposures to Calgary, Vancouver, Edmonton, Halifax and several Ontario cities.

Meanwhile, between Mar. 31 an Apr. 12, 55 international flights landed in Toronto with exposures.

The most--16 planes--arrived from Delhi, India, where this spring a so-called ‘double mutant’ variant was detected in the country.

Abu Dhabi, Dubai, Doha and Istanbul are some of the other top places bringing cases into the province.

“Canada has among the strongest measures at the border,” said Health Minister Patty Hajdu from virtual Parliament Thursday. “Of course we will stop at nothing to protect Canadians.” 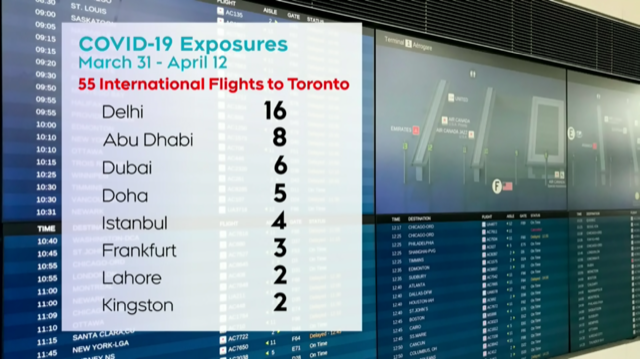 In response to questions from CTV News, a spokesperson for Hajdu later said now is not the time to travel and further action on borders measure will continue to be informed by science and public health advice.

“With variants of concerns spreading around the world, we took further steps to reduce travel, reduce importation and protect Canadians from COVID-19. This includes a mandatory 14-day quarantine and mandatory pre-arrival, arrival, and day 10 PCR testing of all non-essential travellers,” the spokesperson said.

“Our measures are working – less than 2 per cent of known COVID-19 cases are acquired through travel or exposure to someone who travelled.“

Furness said in applying the two per cent analysis to domestic flights, he believes it’s time to act.

“That’s two in every hundred. So if the same kind of population is travelling within Canada and there’s no reason to think it’s not similar,” said Furness.

He points to the success of the Atlantic bubble restricting travel to Canadians from outside the region.

On Wednesday, Ontario Premier Doug Ford asked Ontarians not to fly in and out of the province. CTV News asked the provincial government if it was considering any further measures and it awaiting a reply.

“The extraordinarily successful example of the Atlantic bubble for example, was done without the federal government dictating to the Atlantic provinces that they needed to do this. They made that decision on their own, and it was the right one, and of course, as a federal government we supported them,” said Prime Minister Justin Trudeau Tuesday.

The Public Health Agency of Canada reports 92 per cent travellers who enter Canada by air are required to quarantine.

“Air travellers are less likely to meet an exemption outlined in the Mandatory Isolation Order. Of the 8 per cent of exempt travellers, the majority have been part of the trade or transport sector, including aircrew,” a spokesperson said.

PHAC said as of Apr. 15, it’s aware of 211 tickets issued to travellers in Ontario for arriving without having booked a government-authorized accommodation hotel and subsequently refusing to go to one.

The fine for refusing to go to a quarantine hotel is $3,000.