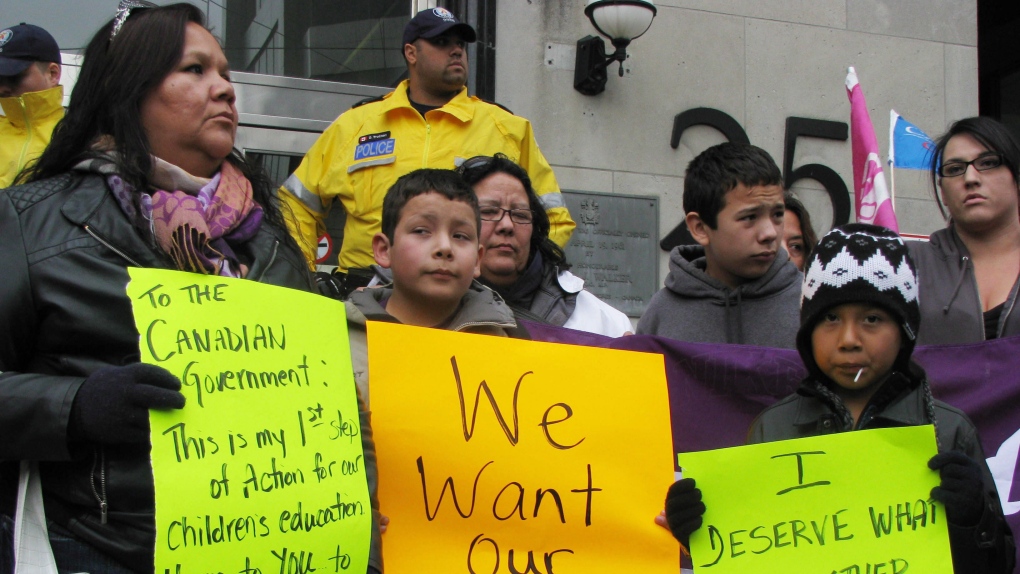 Members of the Six Nations of the Grand River reserve protest to lobby the federal government for school funding and backlogged supplies outside the government's aboriginal affairs and northern development office in Toronto, Thursday, Oct.11, 2012. (Tara Deschamps / THE CANADIAN PRESS)

TORONTO -- Members of a First Nations community gathered in Toronto on Thursday to lobby the federal government for school funding and backlogged supplies.

A bus load of demonstrators travelled from the Six Nations of the Grand River reserve near Brantford, Ont., to chant and march outside the government's aboriginal affairs and northern development office.

The group said elementary schools on the reserve have yet to receive supplies and curriculum materials for the current school year.

Coun. Wray Maracle says only 16 of the 44 orders filed in May have arrived so far, forcing parents and students to buy supplies.

As a result, the groups says many supply teachers have gone without pay since August and schools have been scrambling to photocopy workbooks.

Protesters say parents have had to purchase supplies for their children.

"I had to buy a sketchbook for my daughter to learn art," said Chyenne Williams, who attended Thursday's protest.

"I shouldn't have to pay out of pocket for my child to learn."

Maracle said parents were particularly upset because schools on the reserve were the only ones to be faced with such shortages.

"Our children are not being held in the same respect as students in other areas."

The group vowed to continue to pressure the government until the issues are resolved and school supplies are delivered.

"We need to keep taking it up the chain until something gets done," he said.

The protest comes a week after the government announced investment plans for First Nations education.

The plans include $175 million for reserve school renovations and $100 million for early literacy programming, services and partnerships with provincial school systems.