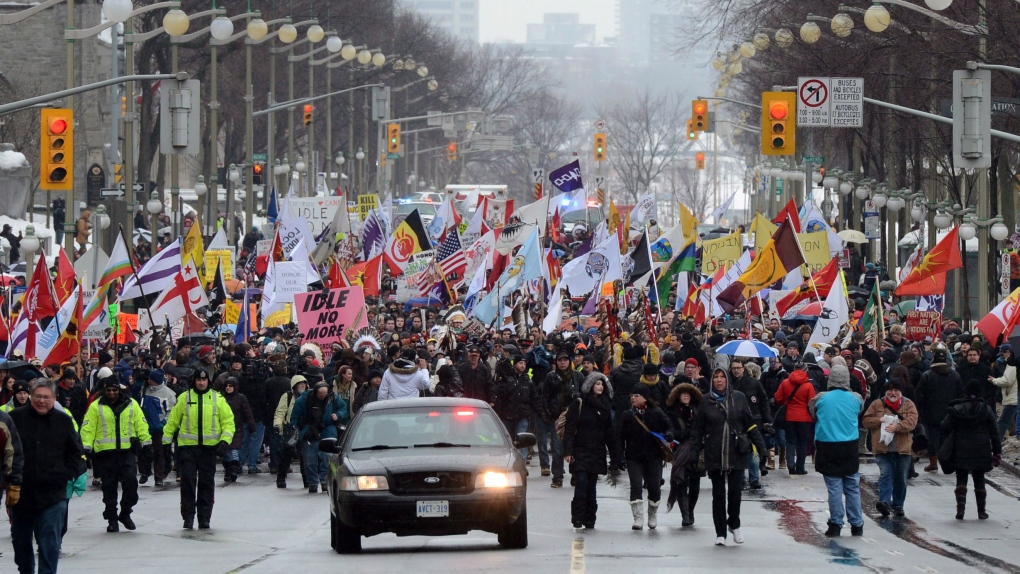 SARNIA, Ont. -- A First Nations protester is facing a bill of more than $16,000 in damages to CN Rail over a rail blockade in southwestern Ontario last winter as part of "Idle No More" protests.

An Ontario Superior Court judge ordered Ron Plain, 51, of the Aamjiwnaang First Nation, to pay the damages in a decision released Tuesday.

Plain was accused of ignoring a court injunction to stop involvement in a 13-day blockade of the railway near Sarnia, Ont., over the New Year in support of a hunger protest by Chief Theresa Spence of Attawapiskat First Nation.

"This was a brief, yet flagrant, breach of a court order in a peaceful protest which caused no property damage," Justice Bruce G. Thomas said in his ruling.

CN Rail was seeking $50,000 in financial compensation for the blockade, but says it's happy with the amount awarded.

"CN is pleased that the ruling underscores the importance of the principle that everyone must abide by the rule of law," said spokesman Jim Feeny.

The company had said they would commit the money to their aboriginal scholarship fund. They will now discuss the proposal with the local First Nations community, Feeny said.

Plain's lawyer, Peter Rosenthal, had asked the judge to limit the damages to $1,000, due to his part in persuading protesters to end the blockade on Jan. 2 and his limited financial means.

Plain was recently employed as an environmental policy analyst but is currently off work with a neck injury, the decision said.

A campaign to raise money for Plain's legal fees on the website Indiegogo brought in under $5,000, about half of his fundraising goal.