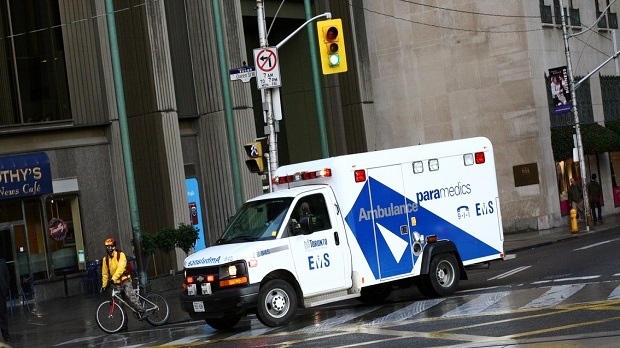 An ambulance is shown in this file photo.

A Toronto firefighter was taken to hospital with minor injuries after a two-alarm fire broke out at a home in Rexdale Saturday night.

The fire started at a home on Allenby Avenue, in the area of Islington Avenue and Highway 401 at around 8:15 p.m.

Crews arrived to find smoke and heavy fire in the interior of the home.

Nine trucks and 35 firefighters responded to the scene to contain the fire.

A firefighter sustained some burns while fighting the flames, Toronto Fire said. Toronto Paramedic Services transported the firefighter to hospital to be treated and described the injuries as minor.

Two dogs were found and returned to their owner unharmed, Toronto Fire said.

The cause of the fire is not yet clear.