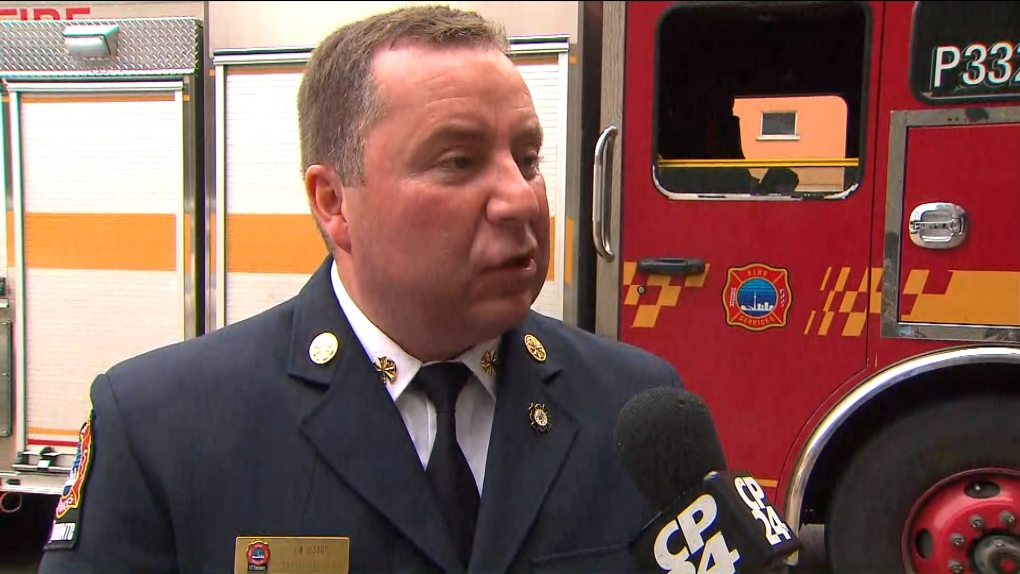 Deputy Fire Chief Jim Jessop speaks with CP24 on Thursday afternoon. Jessop was discussing an investigation into two fire inspection services companies that allegedly failed to “inspect, test, maintain and repair fire systems” after being hired to do so.

Two companies that provide fire inspection services are facing charges under the Ontario Fire Code after they allegedly failed to “inspect, test, maintain and repair fire systems” after being hired to do so.

Toronto Fire Services say the charges relate to alleged violations of the fire code at a commercial building located at 1100 Birchmount Road and condominium buildings located at 77 and 99 Harbour Square.

“In my 22 years I have never seen something like this. You assume that when you are dealing with life safety systems in buildings that those companies who are hired and given the responsibility for inspecting and maintaining them would do the job in accordance with what the fire code says,” Deputy Chief Jim Jessop told reporters at a press conference on Thursday morning. “It really is a breach of trust. These fire prevention systems are in buildings to protect the public and responding firefighters and for these companies to allegedly have gone in and not inspected and maintained those systems causes us great concern.”

Jessop said that Toronto Fire Services became aware of the alleged violations more than a year ago while conducting routine inspections at the affected buildings.

He said that the ensuing investigation was the most “laborious” and “technically complex” that he has ever been involved with.

“The more we dug, the more we saw and we have been working collaboratively with other city divisions to help us with this issue,” Jessop said. “It has been laborious, it has resulted in numerous staff being reallocated and it has involved literally hundreds of hours of time spent going back over records over a number of years and cross referencing those records with the applicable standards.”

Jessop said that investigators are confident that the owners of the buildings “hired companies with the best of intentions” and were not aware that fire systems were not being properly inspected and maintained.

He said that investigators with Toronto Fire Services are now in the process of looking into other buildings where the accused companies may have worked in the past and going forward will be “scrutinizing reports provided by fire prevention companies more closely than ever.”

“We are looking back as far as we can on buildings and we are also tracing back other companies that may be affiliated with these companies,” he said. “The message the chief and I want to send out today is this: we will be watching and we will be looking.”

Jessop said that fire inspectors have worked with the owners of the affected buildings to ensure that their fire protection systems are in working order and that there are no “imminent risks” from a fire prevention standpoint.

As for the accused companies, Jessop said that Toronto Fire Services does not have the authority to shutter their business, even on a temporary basis.

“All we can do is swear charges under the Ontario Fire Code,” he said.

Speaking with reporters outside a fire station on Adelaide Street West, Jessop said that any building that has contracted either of the accused companies in the past should review their records.

“Toronto Fire Services certainly recommends that they take a very detailed look at their paperwork and really pay attention to what paperwork these companies provided them,” he said. “Don’t just take the paperwork at face value but really look at what their contracts are requesting, what the standards and the codes compel the owners to do and see if that matches up with the record and the paperwork that they were provided after the work was done.”

The penalties for violations of the Ontario Fire can go up to $50,000 and/or a year in jail for individuals and up to $100,000 for corporations.