Fiery crash on Highway 401 in Milton, Ont. sends one person to hospital

TORONTO -- One person has been taken to hospital with serious burn injuries after three tractor trailers – one of them hauling dangerous goods— collided on Highway 401 in Milton.

The collision happened in the eastbound lanes of the highway, east of James Snow Parkway, Tuesday afternoon.

Two of the vehicles caught fire following the collision. Images from the scene showed a fiery wreck with heavy smoke rising into the air.

Police, fire crews, and paramedics responded to the scene. 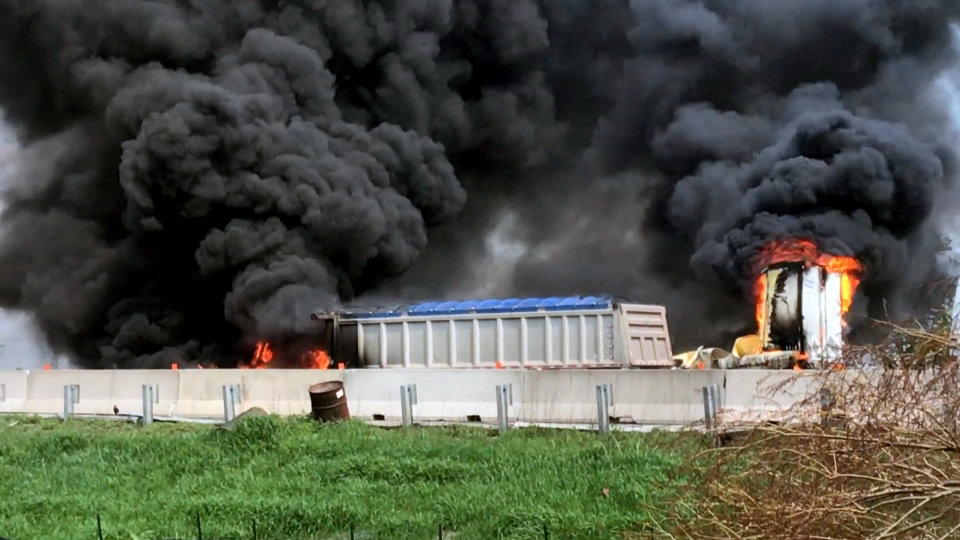 Ontario Provincial Police said one of the drivers sustained serious burns and was taken to hospital to be treated.

“The fire department has brought in multiple tanker trucks of water. Another one just showed up to continue putting out the hotspots,” Schmidt said.

By around 4:30 p.m., firefighters had stamped out most of the flames, however they remained on scene dousing water on the wreckage.

The highway was completely shut down in the area following the collision. The westbound lanes have since reopened. However the eastbound lanes of the highway could remain closed at James Snow Parkway into the evening.

“I suspect the fire and the heat on the roadway may result in the highway needing to be milled and resurfaced. If that is the case I would say that the eastbound lanes will be shut down completely for some time, likely into the evening hours into the overnight hours as well,” Schmidt said.

“We won’t have an idea how bad the damage actually is until were able to get these vehicles removed from the seam to inspect the asphalt.”