An intense thunderstorm swept through Toronto and most of the GTA Friday, toppling trees and leaving many residents without power.

High winds and heavy rain began around the dinner hour, after Environment Canada issued a severe thunderstorm warning for Toronto and many of its surrounding regions.

Environment Canada alerts also covered much of southern Ontario, including cottage country, where winds reaching 80 kilometres per hour caused damage to property in Gravenhurst and Bracebridge. Funnel clouds were also reported near the Barrie area, where an earlier tornado warning was downgraded to a tornado watch.

The national weather agency later downgraded the warning in Toronto to a severe thunderstorm watch.

Some flights were delayed or cancelled at Pearson International Airport and Billy Bishop Airport.

Air Canada advised passengers to check their flight status as the airline warns of possible disruptions to flights in Toronto, Montreal and Ottawa due to the thunderstorms. The airline said any flight-change fees would be waived.

As the skies quickly darkened over the GTA around 6 p.m., Twitter was alight with weather-related posts.

“The wind blowing through the puddles on the roof next door looks like a fast-forwarded film. Darkness falls at Yonge&Eg #dlws,” @impstrump tweeted.

“omg. That breeze off the lake has a blissful undertone of actually being cool. #dlws,” tweeted @paisleyrae.

As the weather system moved across southern and central Ontario, residents were urged to stay indoors. Motorists were advised to avoid travelling through water on roadways or areas where debris could fall.

Despite the promise of cooler temperatures the storms are expected to bring, Toronto remained under an extreme heat alert Friday following several days of sustained heat and humidity. Temperatures on Friday peaked at 35 C, but humidity made it feel several degrees warmer.

Several cooling centres in Toronto remain open to the public.

Southern Ontario can expect relief in the form of sunny but cooler temperatures starting Saturday, when the humidity lifts and the mercury drops to the mid- to high-20s. 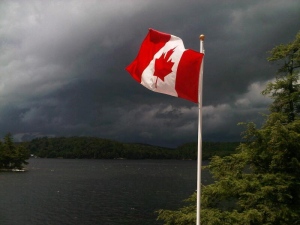 GTA residents took to Twitter during the latest summer storm. 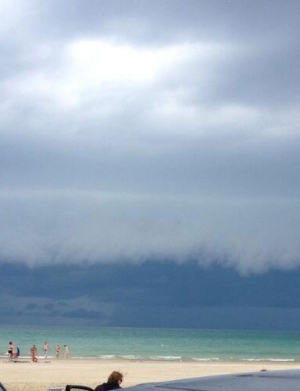