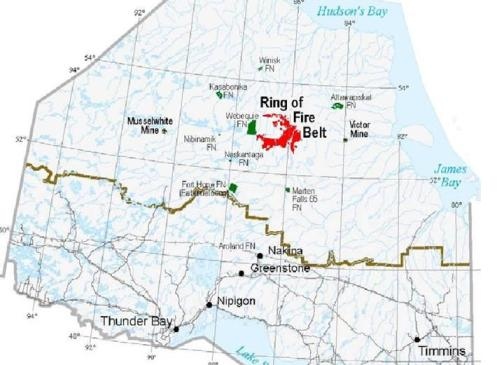 A map of Ontario's Ring of Fire is seen. (Republic of Mining)

TORONTO -- The Ontario Chamber of Commerce is urging the federal and provincial governments to fund a plan to build transportation infrastructure to the Ring of Fire mining development.

It says the lack of a transportation route is a major barrier to developing of the northern mineral-rich region, which it says could generate up to $25 billion in economic activity over the next three decades.

It says the Ring of Fire could generate $9.4 billion over the next decade alone and support 5,500 jobs a year.

The chamber also says it would provide the federal, Ontario and municipal governments with $2 billion in revenue over that period.

It says the federal Conservatives have an obligation to be actively involved in the development as it has for other projects, such as the Alberta oilsands and Churchill Falls in Labrador.