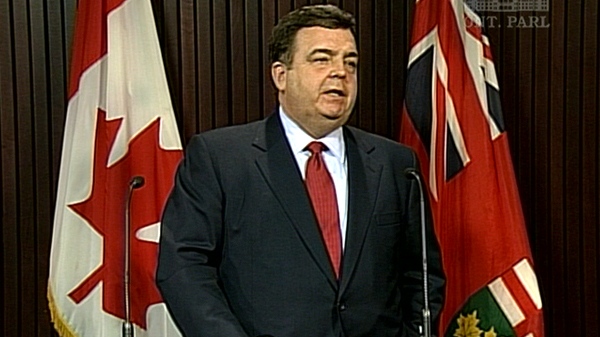 TORONTO - Ontario's governing Liberals slammed the federal budget Tuesday, saying it fails the province on five key fronts that may affect the Tories' fortunes in a spring election.

Ontario was also shortchanged on unemployment benefits, skills retraining and immigrant settlement policies compared to other provinces, he said. His calls for a modest improvement to the Canada Pension Plan also went unanswered.

The budget -- which resurrected a home-energy retrofit program and contained a $300-million boost for the poorest seniors -- seemed to be aimed at provoking an election, Duncan said.

"I believe that the budget was not designed to get passed," he said. "I can't imagine how (federal NDP Leader Jack) Layton could support this budget in its current form. And the amount of change it would require would, in my view, require an enormous backdown from the government if they were to do that."

Layton asked for "reasonable" measures, such as relief on skyrocketing home heating costs, but the federal Tories ignored them and provoked an election, said Ontario NDP Leader Andrea Horwath.

"These are all things that would help families and their pocketbooks, which we know is a huge issue in Ontario and across Canada," she said.

"If the government of Canada was serious about staying in power in its current form, they would have actually been able to meet those demands quite easily."

Minutes after the budget was tabled, Layton loudly condemned it along with the other two opposition leaders, setting the stage for a May election. A provincial election is already set for Oct. 6.

Duncan, who plans to campaign for his Liberal cousins, wouldn't speculate on whether a national election this spring will boost his party's chances of forming a third government this fall.

Voters tend to vent their frustrations on the first available target, or so the theory goes.

Duncan said his party will keep up the pressure on its five key demands and lay out its approach in his March 29 budget.

"Ontario will be our top priority -- jobs, health care -- those are the kinds of issues that are important," he said.

The province still doesn't get a fair shake with equalization -- it puts in $5 billion a year only to get $1 billion back -- and the federal Tories have done nothing to support Ontario's green energy plans, he pointed out.

"That energy is important not just to Ontario, but to Canada," Duncan said.

"So these are the sorts of things I think Ontarians will want to keep in mind as they go to the polls."

No matter who forms the next government, health-care funding will be a major issue in federal-provincial relations, he added.

Premier Dalton McGuinty raised the issue earlier in the day, saying the current arrangement with Ottawa expires in 2014 and negotiations will likely get underway later this year.

Provinces and territories will be looking for a federal partner that's "fully committed" to continuing to fund health care fairly and adequately, he said.

"I think it's important to get that on the table right now because ... it takes a couple of years to negotiate that, and it's important that we have a partner of the same mind on the other side of the table," McGuinty said.

Ottawa shouldn't turn off the stimulus taps completely either, he said.

The economy has turned a corner, but it still needs continued investment in infrastructure, he said.

"They used to do that before the recession," he said. "We did it to a much greater effect subsequent to the recession.

Prime Minister Stephen Harper had warned his political opponents that it would be economically dangerous to force an election in the wake of the massive earthquake and tsunami that devastated Japan.

"Elections aren't matters of convenience," he said. "They are, by nature, disruptive, and there are millions (of people) around the world struggling to enjoy the disruptive, messy, miraculous process we call democracy. And if we have an election, so be it."