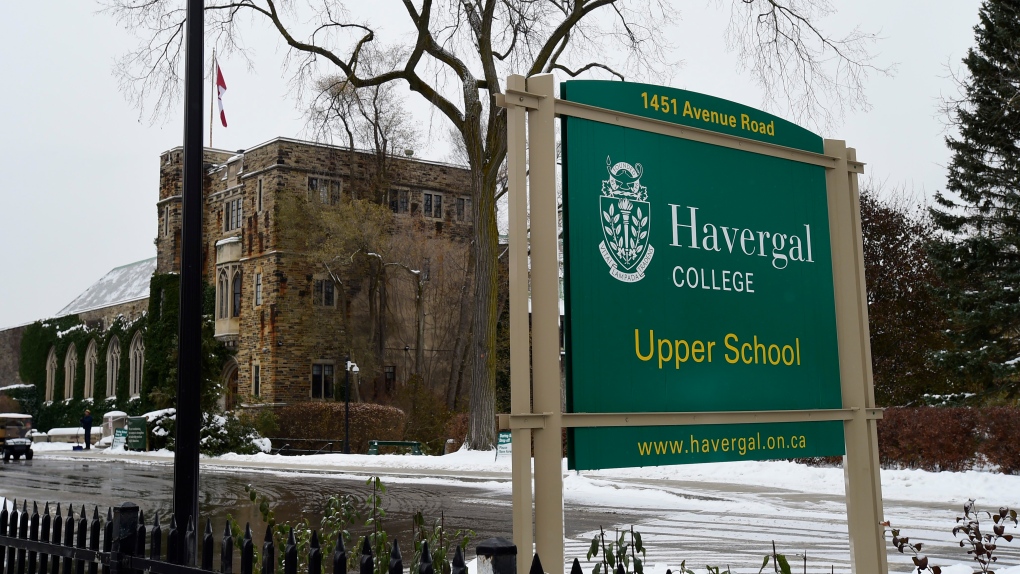 Havergal College is shown in Toronto on Thursday Nov. 14, 2019. THE CANADIAN PRESS/Frank Gunn

TORONTO -- A Toronto father alleges in a lawsuit filed against Havergal College that the prestigious girls private school expelled his seven-year-old daughter because he complained that she was bullied, while the school claims his own inappropriate behaviour is the cause of her expulsion.

The legal saga began with bullying allegations involving two former friends at the all-girls school that runs from kindergarten to Grade 12, but has escalated into a $5.5-million suit filed by the aggrieved father, Andrew Rogerson.

Rogerson's statement of claim, filed with the Ontario Superior Court of Justice on Oct. 18, alleges his daughter suffered "verbal and physical bullying" at the hands of another girl and adds that not only were his concerns dismissed, but the school decided to expel his daughter and not her alleged bully.

In a statement of defence filed Oct. 30, Havergal alleges Rogerson breached the school's code of conduct by stigmatizing the other girl, who is referred to as "student A", and disparaging her family and the institution's staff.

Rogerson is also asking for a court injunction to have his daughter's expulsion,@ set to take place Dec. 20, revoked so that his daughter can stay at the school, which he said she loves, despite her bullying problem.

None of the allegations have been proven in court and there are no allegations of criminal wrongdoing.

Questions about how private schools handle bullying allegations have been thrust into the spotlight since allegations of sex assault at another Toronto private school arose last year. A former student at St. Michael's College School earlier this month filed a $1.65-million lawsuit against the institution alleging it failed to keep him safe.

Rogerson's statement of claim suggests Havergal failed to take action to protect his daughter, a Grade 2 student at Havergal, which she's attended since junior kindergarten.

The bullying by another girl began in October 2018 and took a toll on his daughter's mental health, he said in the documents.

"She began to act out towards her parents and teachers, to strike her parents, and to report incidents of being hit by (student A) to various staff members at Havergal," Rogerson said in the claim.

Rogerson and his wife said they tried to deal with the school through in-person discussions, as well as over the phone and through email.

"No real solution was ever presented, and the bullying continued," Rogerson's claim said.

Havergal, meanwhile, denies those allegations in its statement of defence. The school said Rogerson called the other student a "bully" in a parent-teacher interview on Oct. 25, 2018.

The teacher told the Rogersons that she "had not observed any inappropriate behaviour" by the other girl.

The teacher "understood that the two girls had been friends in (senior kindergarten) and appeared to enjoy each other's strong personalities," according to the statement of defence.

The school said the teacher tried to separate the pair whenever possible afterward, but that was difficult because Rogerson's daughter continued to hang out with the other student.

The school said Rogerson sent teachers and other staffers numerous emails about the other student's behaviour, including an allegation the girl hit his daughter and other girls in the face.

Havergal said it closely monitored the pair, and school officials spoke to both the Rogersons and the other girl's parents.

The school said it never saw any behaviour "that was physically aggressive or fell outside the expected and accepted range of developmental norms for 6 and 7 year old girls."

But "Rogerson became fixated on student A," Havergal alleges in its statement of defence.

Havergal investigated the incident and concluded that both girls raced to be first in line to go outside, and that the other student had "impulsively squeezed" Rogerson's daughter from behind using her body and arms.

Rogerson's daughter became upset, "which in turn had caused her nose to start bleeding," something the Rogerson family, Havergal said in court documents, acknowledged happens to her spontaneously.

In response, Havergal provided counselling and guidance to the other girl and her family, the school said.

"Rogerson refused to accept the school's findings about the incident," Havergal said in the statement of defence. "Instead, he insisted on repeatedly referring to the incident as an 'attack'."

The two girls were assigned different classes in Grade 2, the school said.

At a meeting with his daughter's new teacher and another staff member on Sept. 17, the school alleges Rogerson focused the conversation on the other girl, saying the school had "covered up" his concerns.

He also said the school made him and his daughter feel like criminals and compared Havergal's handling of the case to "another private school's handling of a brutal sexual assault involving 15-year-old students," according to the statement of defence.

The school alleges Rogerson threatened two staffers during that meeting, telling them "if you shut me down, I'll shut you down." The school says the principal determined his behaviour had breached its code.

The staff members reported they felt intimidated and harassed by Rogerson and said they were not comfortable with meeting with him again.

That caused a "complete breakdown in the relationship of trust and confidence between the parents and the school" and, under terms of the contract, Havergal said it sought the "forced withdrawal" of Rogerson's daughter from the school.

The case is next in court on Nov. 28 as the school seeks a publication ban on the identity of the other girl and her family.

This report by The Canadian Press was first published Nov. 14, 2019.