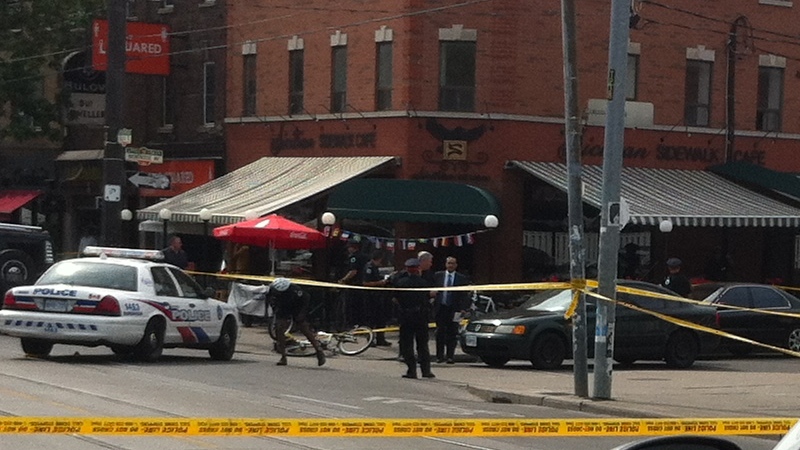 A daytime shooting at a Little Italy cafe left one man dead Monday, as crowds flocked to the neighbourhood to watch a Euro Cup soccer match between Italy and Ireland.

Police confirmed that two people were shot in what they are calling a targeted attack.

One man, believed to be in his 30s, was wheeled from the cafe on a stretcher and loaded into an ambulance. That man received only minor injuries, police said.

One witness told CP24 that he saw a man, who appeared to be dressed as a construction worker, walk onto the cafe's packed outdoor patio and open fire.

The witness said the victim was shot in the head.

Witnesses at the scene reported hearing at least five shots.

Police Const. Wendy Drummond told CP24 that officers were still looking for the suspect, who is described as a white man, with shoulder-length dirty blond hair. He is about six feet tall with a medium build and was wearing a white hard hat, a white filter mask on his face and an orange safety vest with a fluorescent green X on the front and back, she said.

Drummond said the man fled north on College Street after the shooting and she made an appeal to area residents to check their properties and report anything suspicious to police immediately.

"We're appealing to anyone that lives north of College, check your property, check your backyards, your garages, potentially, for those items that were being described, or anything that appears out of the ordinary," said Drummond.

They are also asking store owners in the area who have closed-circuit television cameras to call police, as it may be useful in their investigation.

In the minutes after the shooting, broken glass littered the street outside the cafe, and police pushed people away from the scene and taped off a large part of the block.

The road was closed to traffic between Crawford Street and Grace Street.

In fact, cheers could be heard from nearby bars as police investigated at the crime scene.

Two local schools, Montrose Junior Public School and Delta Alternative Senior School, were placed on a hold and secure after the shooting, meaning the doors were locked and students and staff had to remain inside.

Toronto District School Board spokesperson Ryan Bird said most of the students had already been dismissed for the day, but anyone still there was being kept inside until police told them that the neighbourhood was safe. They lifted the hold and secure at about 4:30 p.m.

With files from CTV Toronto's Ashley Rowe and Scott Lightfoot