The family of a young man found murdered in the back of his car pleaded Friday for those with information to come forward.

“The people that were there, they’re not helping. They’re not communicating with us,” Amin Said said in the Kipling Avenue plaza where his 21-year-old brother, Amir Naraine, was found dead Sept. 29.

“But that’s fine. If they don’t want to talk to us, at least, you know, you can go to police and talk to them privately, do what you have to do. Because at the end of the day, these were people that he grew up with. These were his close friends, people that he thought were his brothers.”

Naraine was found dead in the back of his black Chevrolet Malibu the evening of September 29.

Surveillance video released by police showed two people driving the Malibu to the parking lot about 19 hours earlier before walking away.

Police have yet to identify those two people. Nor have investigators found the location where Naraine was shot.

Wearing a T-shirt bearing Naraine’s picture, Adrienne Naraine described her son as “a good kid,” someone who “would give you the shirt on his back,” and who was remembered at his funeral as someone who helped area residents with their bags and with crossing the street.

“I never came across anyone who didn’t like him. Everybody liked him. Everybody loved him. He was sweet. He was loving. He was caring. He cared about everybody else, always put himself last,” Adrienne Naraine said.

“One guy said he met him for five minutes and that five minutes was all he needed, you know? He touched so many people’s (lives).”

According to Said, the family, like police, have had a hard time piecing together what happened to Naraine — and where.

His brother said that before Naraine was reported missing, a friend called to say Naraine had been shot, alongside another friend. Said went to a Toronto hospital to question the other man who had apparently been shot, but said that man could not tell him where Naraine was or where the gunfire erupted. 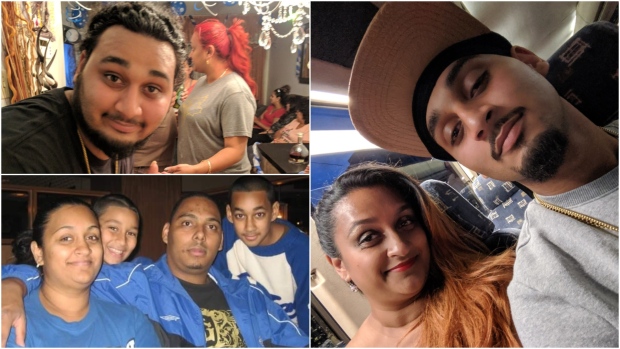 Lead homicide investigator Det. Sgt. Andy Singh said Friday he is keeping an open mind about what led to the shooting, where it happened and who was there. He said he is still trying to identify the two men seen leaving Naraine’s car after it was dropped off.

“I’m pleading that if anyone knows anything to please step forward, please help get justice for my brother,” Said said.

Said remembered his brother as a hard-working, religious, funny and family-oriented young man who loved to dance.

While the brothers grew up a short walk away from where Naraine was found dead, they had not lived there for several years.

Naraine lived with his mother and stepfather in Caledon, but still frequented the Kipling-and-Steeles neighbourhood and had several friends there, his brother said.

Anyone with information is asked to call the Toronto Police homicide squad at 416-808-7400. Anonymous tips can be left through Crime Stoppers at 416-222-8477, 222tips.com or by texting TOR and your message to CRIMES.