Family loses everything in Scarborough fire 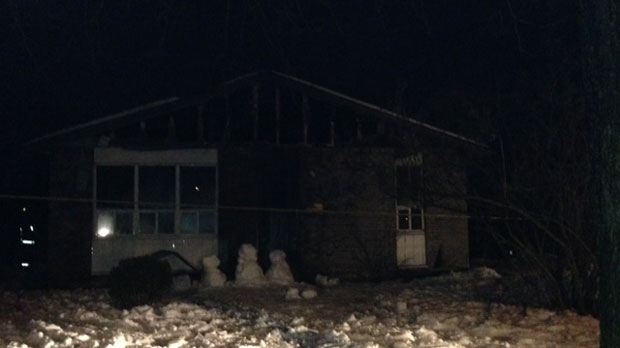 A house destroyed by fire on Kessack Court in Scarborough is seen in this picture on Thursday, Feb. 28, 2013. (CP24/Cristina Tenaglia)

A single mother of four says her family has lost everything after fire gutted their home in Scarborough Thursday night.

“We lost everything down to our toothbrushes,” Diana Gardiner told CP24 outside her home. “We can start over, but we lost our dogs. My kids lost everything.”

The call for the two-alarm fire at Gardiner’s home on Kessack Court, in the Neilson Road and Sheppard Avenue East area, came in shortly before 7 p.m., a representative with Toronto Fire Services says.

The approximately 55 firefighters on scene were forced to battle the fire from outside the building following the partial collapse of the roof.

Gardiner was out for dinner at the time the fire began.

“It went up really fast and thank God none of us were home,” she said.

While the cause of the fire was not immediately known, Gardiner said this was not the first fire at the home.

“We’ve had two electrical fires since July, and have made many reports to the landlord about it,” she said.

Gardiner said she and her family would be spending the night with friends as they figured out what comes next.

Investigators from the Ontario Fire Marshal’s office are expected to attend the scene tomorrow.