TORONTO -- The family members of 10 Toronto residents who were killed by drunk drivers gathered inside the TTC Wilson Yard garage Sunday afternoon to get their first look at new campaign posters that will feature their lost loved one.

The initiative is organized by Mothers Against Drunk Drivers (MADD) and is meant to raise awareness about the dangers of impaired driving. Each poster features a photo of a victim alongside the message “a victim of an alcohol related crash.”

“When you see all the buses here today and all the pictures at the back and realize that every one of those families is going to have someone missing at their table this holiday season it is a really sobering reminder of what can happen,” MADD Canada’s Regional Director for Ontario East Carolyn Swinson said on Sunday. “It is a blink of an eye and it changes your life forever.”

“They just don’t want other families to go through what they’ve gone through.”

Each of the families present at the garage has been through a devastating loss. Antonette and Brian Wijeratne lost half of their family in a crash near their Toronto home in 2012.

Antonette was in a car with her husband Neil and daughter Elisha, coming home from a trip in Florida, when a drunk driver going the wrong way slammed into their car on Highway 401.

In an instant, Neil and Elisha were killed. Their surviving family has struggled ever since and they hope no one else has to deal with a loss like theirs.

“Doing this, I feel good,” Antonette said while standing next to a bus with a photograph of her husband and daughter. I feel like, doing this, we (are) saving some children (and) parents. Because I know the pain. I know the pain (of) losing a child, I went through that.” 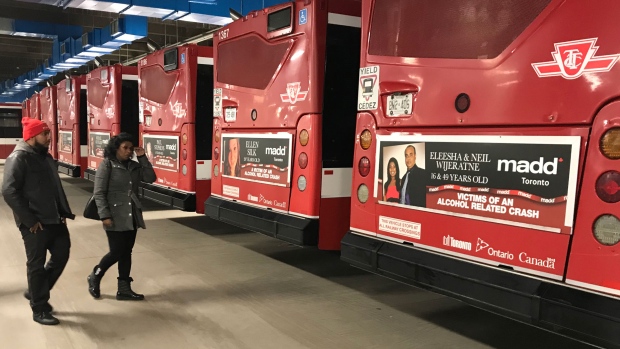 Life hasn’t been easy ever since the crash. Beyond the three months she spent in hospital, the reality of losing two members of her family is with her and her son every day.

“We were happy family. We lived very happy peaceful life. And now, just two of us. It’s so empty. My house is so empty without my little girl, without my loving husband.”

Antonette’s son Brian is also deeply affected by the loss.

“Originally I had no idea what kind of impact it would have on my life. And over time that’s when I started seeing the impacts. When a house is half empty, when you don’t have those two in your life, your life does start going in different directions than what it would have been.”

Every one of the families has had their life changed by a similar incident.

“He was just going for a coffee,” she said. 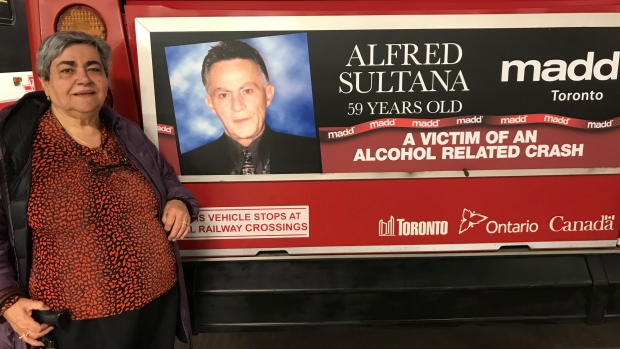 She and her two sons miss him every day and aren’t even sure he would have wanted to be in this campaign. But Sultana says it was important.

“It means a lot to me. I don’t think he would have loved it, because he was a very private person. But for me, I figured if somebody’s driving behind the bus and sees that, maybe it make them think not to get behind the wheel.”

Swinson has driven behind a bus with her son, Rob’s, picture on it in past years. She was surprised by her reaction the last time she saw it.

“It’s kind of a silly thing, but Rob’s bus was in front of us, and the bus was dirty and I wanted to get out and clean the bus because it was his picture." 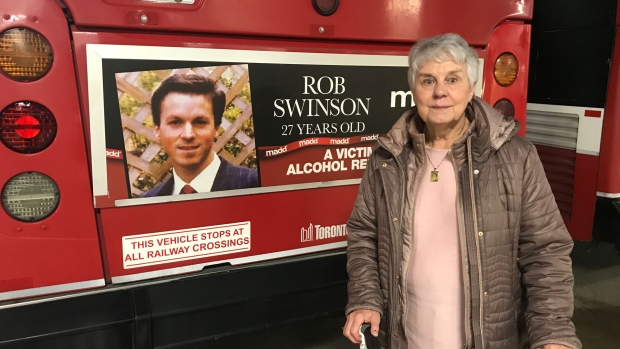 Rob was killed two days before Valentine’s Day in 1993. The 27-year-old was on his way to get a gift for his girlfriend.

“His car was basically wiped off the road. He was sadly, pronounced dead at the scene of that crash. He just didn't stand a chance.”

The woman driving the other vehicle involved in the crash had a blood alcohol limit two and half times the legal limit. Swinson says witnesses to the crash say he never even had a chance to react to her speeding car.

But all of the families at the Wilson Yard are hoping that people will have a reaction to seeing their loved ones on the back of TTC buses.

The buses will be on the streets until early in the new year.