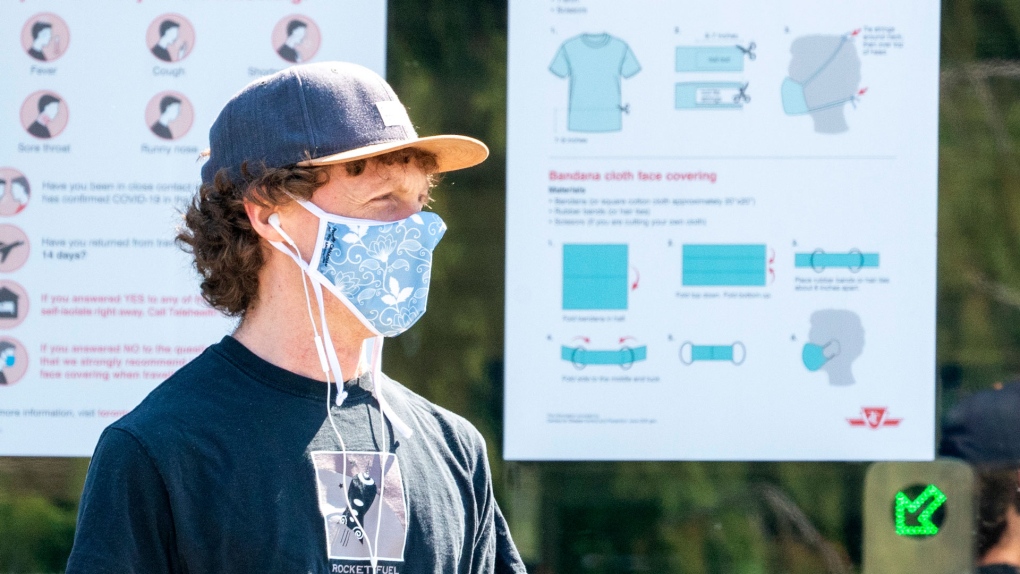 A man wears a mask as he exits a Toronto Transit Commission subway station in Toronto on Thursday July 2, 2020. THE CANADIAN PRESS/Frank Gunn

TORONTO -- Face coverings are now mandatory across most of the GTA after new bylaws went into effect in Peel and Durham regions on Friday.

Masks have been mandatory in indoor settings in Toronto since Tuesday but had remained optional in a number of other GTA communities while their respective councils met to debate the issue.

That is, however, quickly changing.

On Friday a bylaw requiring masks in indoor settings went into effect in Mississauga, Brampton and Caledon. Durham Region residents will also be required to wear masks in public indoor settings as of today following guidance from Medical Officer of Health Dr. Robert Kyle that was issued earlier this week.

Meanwhile, York Region Council has voted in favour of its own mandatory mask bylaw that will go into effect on July 17 and Halton Regional Council will meet on July 15 to consider a similar bylaw.

All of the various bylaws and orders exempt younger children and anyone with an underlying medical condition that makes it difficult for them to wear a mask.

“We believe this is critical for the reopening. If we want to get to stage three we have to get our numbers down and all the top medical officials are saying this is the tool to do it.” Brampton Mayor Patrick Brown told CP24 on Friday.

The City of Brampton will be mailing three disposable masks to every household as a way to “kickstart” the new bylaw, Brown said.

He said that as part of that package residents will also receive a letter from Medical Officer of Health Dr. Lawrence Loh advising them on how to properly wear a mask.

Speaking with reporters at a press conference on Thursday, Mississauga Mayor Bonnie Crombie said that go forward wearing a mask in public will just become “the new way of life.”

“We can’t get complacent. If you leave our house don’t forget your keys, your wallet and your mask. I know they are uncomfortable and awkward but I think we can all agree that it is far better than to get the virus or to knowingly give it to someone else,” she said.

The mayors and chairs of the Greater Toronto and Hamilton Area municipalities previously asked the province to issue a blanket order making masks mandatory in large municipalities but Health Minister Christine Elliott refused to do so, citing the fact that local officials already had that authority.