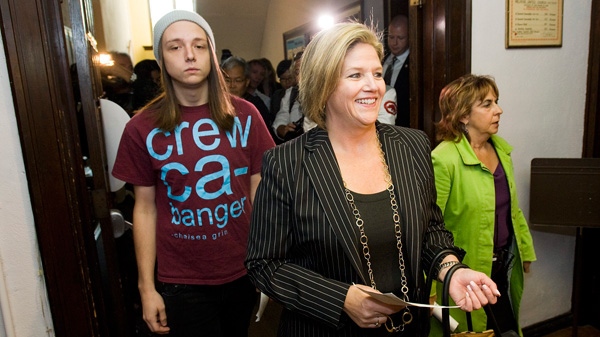 The teenage son of Ontario NDP Leader Andrea Horwath is raising some eyebrows with his choice of election day fashion.

Julian Leonetti, 18, showed up to vote with his mother Thursday in her Hamilton Centre riding wearing a T-shirt emblazoned with "Crewcabanger" - a song by metal band Chelsea Grin.

The profanity-laced song features misogynistic lyrics about a woman who is described as a "useless waste of human flesh."

The Urban Dictionary website defines a "crewcabanger" as a promiscuous female, among other things.

Thursday's election was noted as Leonetti's first chance to vote provincially and Horwath said it was "wonderful" that they could cast their ballots together.

Leonetti, who wore a light-coloured toque over his long hair, said he was proud of his mom and always has been.

Horwath's campaign said no one knew anything about the T-shirt or its meaning.