Every Toronto neighbourhood, ranked from most expensive to cheapest average monthly rent 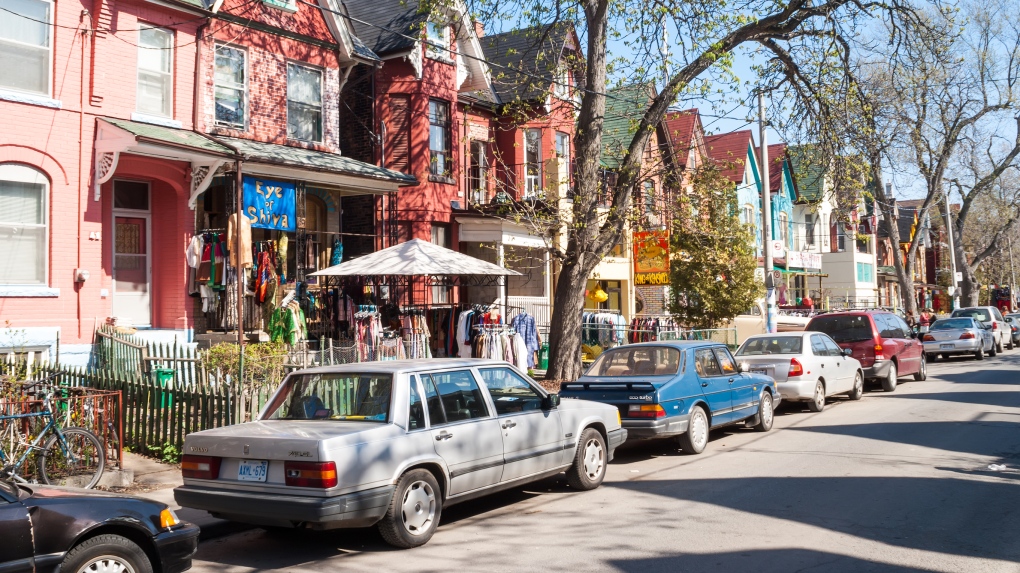 Houses and shops in Kensington in Toronto, Ontario, Canada. (Courtesy of Deymos/Dreamstime)

TORONTO -- A new report released on rental trends in the Greater Toronto Area has released a ranking of each neighbourhood showing the cheapest monthly rental prices to the highest.

While rental prices across the city declined steadily over the course of 2020, many parts of the city are beginning to see a stabilization in prices.

Currently, 14 neighbourhoods in Toronto have average rental prices higher than $2,000 a month.

According to the report, the neighbourhood with the most expensive average monthly rental price this year was Rosedale-Moore Park at $2,308, down 14 per cent from the first four months of 2020.

While Rosedale-Moore Park may have topped the list, the average square footage of each rental unit was 769 square-feet.

Palmerston-Little Italy and Dufferin Grove took the second and third spots, with monthly average rental prices of $2,235 and $2,203, respectively.

The area that saw the smallest decline in rental costs was High Park North, with a decline of three per cent, while the Yonge St. and St Clair Ave. neighbourhood saw the highest decline — a 39 per cent decrease. 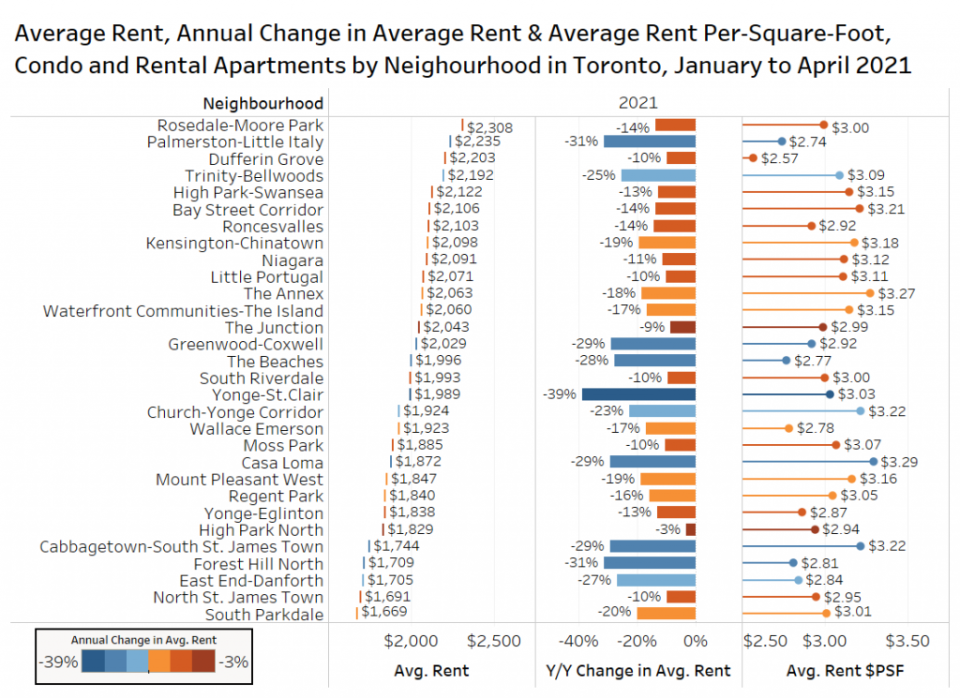 Toronto Rentals notes that “the composition of the listings plays a factor in movements in the average rent on a monthly basis.”

“If there were a lot of large units for rent last year and a lot of smaller units for lease this year, the average rent is lower, but it may not reflect landlords actually lowering rents,” the report reads.

In addition to ranking each Toronto neighbourhood, Toronto Rentals May 2021 Rental Report also provides data on municipalities in the Greater Toronto Area. Vaughan took the top spot, with an average monthly rental price of $2,136.

“The average rent for a condo or rental apartment in Vaughan has experienced the largest month-to-month increase in April 2021, rising by nearly 10% to $2,136 per month. Pickering was a close second, experiencing a month-over-month increase of 8.3% to $1,790 per month,” reads the report.

According to the report, the fact that Toronto has increased month after month by only just under one per cent indicates that the demand for tenants the downtown Toronto area is increasing.

The municipality of Whitby had the lowest rental price — $ 1,510 per month.

According to Ben Myers of Bullpen Research, COVID-19 lockdowns and vaccine setbacks are to blame for the slow return to downtown city living.

“Lockdowns and vaccine setbacks in Toronto have forced many employees to continue working from home. There remains strong demand for larger units in the suburban areas,” Myers wrote.

A report by Statistics Canada released in January 2021 stated that Toronto saw a record-breaking loss of residents from July 2019 to July 2020 as more and more city-dwellers moved to the suburbs.