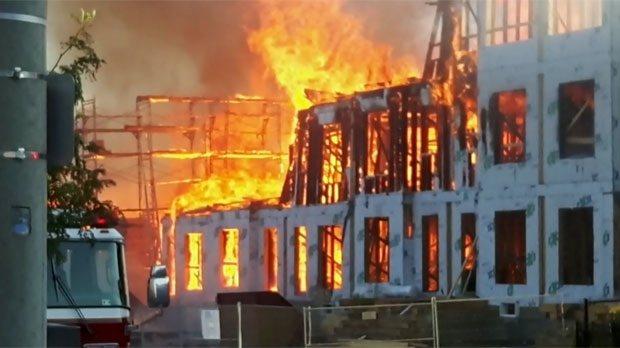 Emergency crews are on scene of a massive fire at townhouse complex in Whitby.

Emergency crews were battling a massive fire at a townhouse complex that was under construction in Whitby on Thursday evening.

The fire broke out at around 6:45 p.m. in the area of Rossland Road and Garden Street.

At the scene, Whitby Fire platoon chief Jeff Dinsmore told CP24 that the heat radiating from the building was “pretty intense.”

“Our major concern was the townhouse 30 feet away. It sustained quite a bit of heat damage but we were able to get water on those buildings to prevent any further damage.”

Dinsmore said he could feel the heat while approaching the scene.

“I was first on scene and when I drove by coming down Civic Centre Drive – I had to drive completely by the involved structure – I had my window open and I could actually feel the heat and I was afraid the paint was going to come off my vehicle,” he said.

Surrounding homes in the area were evacuated by officials due, but Dinsmore says they should be able to return to their homes later Thursday night.

One firefighter suffered minor injuries due to the heat of the blaze. No other injuries were reported.

The townhouse complex that was under construction was slated to open in 2018.