TORONTO -- A Toronto Police officer and his canine partners made a couple of young friends while responding to an emergency call last weekend.

Nine-year-old Steven and seven-year-old Liam are two very typical brothers, with not so typical stories.

But according to their mother, both boys have always been fascinated by policing, and both boys have wanted to be police officers for as long as she can remember.

She says that trips to SickKids Hospital aren't complete without a stop at the Toronto Police Museum, where they're on a first name basis with the curator. And both boys have had the opportunity to ride-along with officers, and meet former Toronto police Chief Mark Saunders.

For the past several months, they've mainly been stuck indoors. Compromised immune systems mean that COVID-19 presents a greater threat to them than most children, so their parents have kept them inside.

"We're very scared as parents," the boys’ mother, Crystal Spice told CTV News Toronto. "Steven and Liam both cannot wear masks, so it's been a very scary time. We keep them indoors away from everybody. They only come out occasionally when there's not a lot of people around."

Last Saturday, there were a lot of people around their Lawrence Avenue apartment building, many of them police in uniform. An emergency call had brought officers to the high-rise, including tactical and K-9 officers. The boys, from their ground floor apartment, opened a window to see a police officer standing right outside.

"I was actually taking cover underneath a balcony on the ground floor," Const. Scott Aikman told CTV News Toronto. "And I hear a rap, rap, rap on the window behind me. And I looked and there are two kids and their eyes are like saucers."

Aikman, and his police dogs Baron and Karma, were among the officers dispatched to the call which was happening on an upper floor. After the situation had been safely and peacefully resolved, Aikman returned to the window and this time he did the knocking. The boys came immediately to see what was happening.

Spice described the scene from inside the apartment as the officer " tapped our window ledge for Baron to jump up and fist pump the boys through the window.”

“And he said 'if you don't mind, go get them, come have them meet my other dog Karma,’” Spice said.

Photos taken by their mom show the boys talking with Aikman, and getting the chance to meet and ask questions about his dogs. Spice says the officer and his dogs spent about 20 minutes hanging out with the boys, a welcome change from the isolation of the past months. 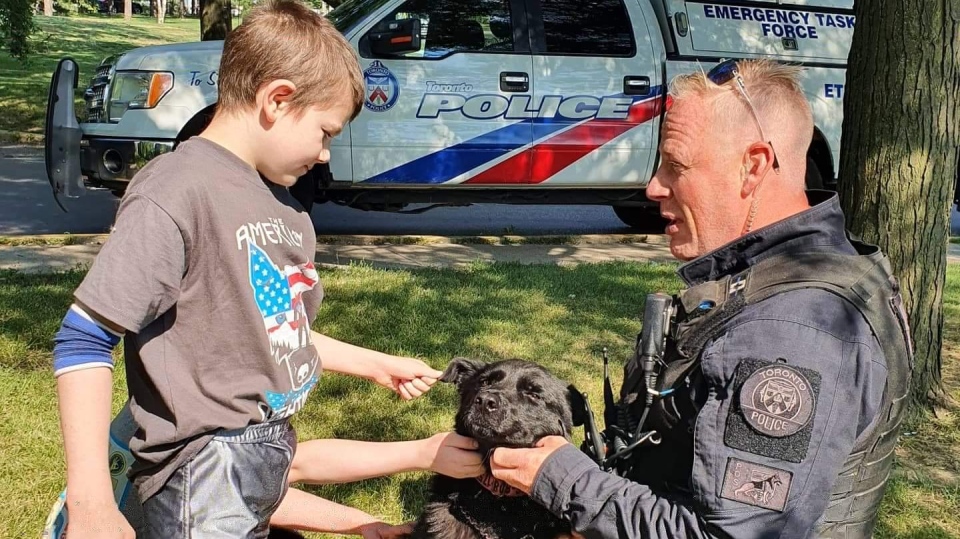 "It brought excitement to the boys,” she said. “COVID has been very hard for all families, but especially when you have kids who are immunocompromised and they've had to give up their friends, and their teachers, and their routines and everything. It’s very scary. It brought them back to a moment where they could just be kid, and they could wonder and they could hope."

Speaking to CTV News Toronto on Wednesday at the Toronto Police Dog Services headquarters, Aikman explained that he was drawn to the boys’ excitement over seeing him and his fellow officers at work.

"I'm getting chills just thinking about it,” Aikman said. “It really does warm the heart and it makes you feel like I am doing something good out here, I am helping people, I am making a difference and it's showing."

Const. Aikman said after he learned about the boys medical conditions, and heard stories of how they've gone out of their way to help others in need, he decided to ask their parents for permission to post a photo to his Facebook account. That photo has now been seen by thousands of people, and he's received comments from around the world. A testament, he says, to the brothers.

"What a wonderful set of kids these are, like just the genuine love they want to give to the community and to the police it just blew my mind away."

Spice says her boys consider Aikman, Baron, and Karma their new friends and says plans are already in the works for the five to meet again soon.

"To know that our boys touched him just as much as he touched them, it really meant the world to me."