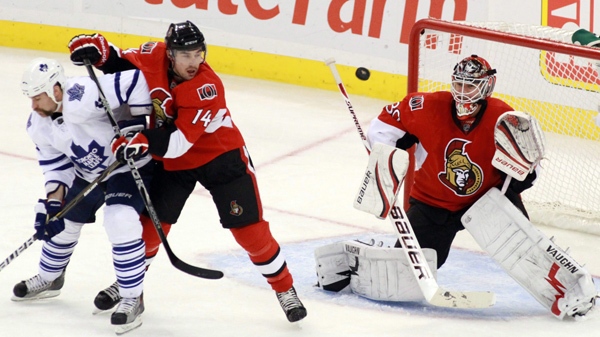 Mike Fisher scored twice and Brian Elliott made 29 saves as the Ottawa Senators blanked the Maple Leafs 3-0 at Scotiabank Place.

The line of Fisher, Alex Kovalev and Milan Michalek accounted for all the scoring, with Kovalev scoring the other goal while adding two assists and Michalek chipping in with two assists.

The Senators (11-12-1) ended a two-game losing streak, as Elliott made his first start in four games and picked up his second shutout of the season.

"Elliott did a great job and made some good saves when he needed to and kept us with that lead," said Fisher. "We're a much better team when we're playing with the lead. Divisional games are really important and that was a big one for us."

Jonas Gustavsson made 25 saves in a losing effort for the Maple Leafs (8-11-3), who have lost three of their past four games.

Kovalev opened the scoring late in the first period, collecting a rebound and scoring on the game's first power-play opportunity.

The Leafs had the best opportunities early in the second period, but it was two pretty passing plays by the Senators that essentially put the game out of reach.

Kovalev to Michalek to Fisher gave the Senators a 2-0 lead as Fisher waited for Gustavsson to commit before slipping a backhander past the netminder at 12:51 of the period.

With one minute to go in the frame, Michalek to Fisher to Kovalev and back to Fisher gave the Senators a 3-0 lead as a give-and-go finished up a 2-on-1 with the puck in the net.

"Those were two of the nicest goals you'll see all year probably from our team," said Spezza.

Fisher's goals we're just his second and third in the past 12 games and his first points in four games.

"When you're coming out of little slumps and you have one good (game) where you're almost feeling it and the next game you're right there, that's what happened," Fisher said.

The Senators went into the third period with a 3-0 lead which quieted the thousands of Leafs supporters in the building who were extremely vocal all night.

"I don't know if I'd call it frustrating but it's tough for all of us," said Gustavsson. "We had some scoring opportunities but the puck wasn't bouncing for us. We just have to keep working the same way, try to improve myself and the other guys will do their part."

Notes: Leafs defenceman Tomas Kaberle is third on the club's all-time games played list with 842, two fewer than Darryl Sittler and 105 back of Bob Pulford. ... With an average age of 26 years, the Leafs are the youngest team in the NHL. At 26.1 years, the Los Angeles Kings are the second youngest. ... Clarke McArthur is the only player in franchise history to score in his first four games with the Maple Leafs, St. Pats or Arenas. ... Daniel Alfredsson is the only player to play 1,000 games and collect 1,000 points in a Senators' uniform.