TTC officials are using a special equipped Caterpillar loader to pull an SUV out of the Queens Quay streetcar tunnel after a motorist drove it all the way into the Union Station streetcar platform early on Wednesday morning.

Sometime early Wednesday, an elderly man driving a GMC Acadia SUV entered the streetcar tunnel on Queens Quay West near Harbour Square, and drove approximately 600 metres through it, mounting his vehicle on a concrete block in the Union Station streetcar platform.

Spokesperson Stuart Green said the driver managed to get past special gates and bollards installed in 2018 to prevent vehicles from entering by following directly behind a streetcar.

And here's what an SUV stuck on the Union Station streetcar platform looks like. The concrete block is a walkway to the operator toilet. pic.twitter.com/7CQOt5oRpW

Toronto police say they do not believe any other motorist has ever made that far into the streetcar tunnel before, though many have tried.

“It’s a bit of a mystery to us [as to how this happened]. The best guess we have is that the car was very close behind a streetcar," Green told CTV News Toronto Wednesday afternoon.

"To carry on through the tunnel all the way past the Queens Quay station to Union Station platform … I don’t think that’s ever happened before, it’s about 600 metres."

TTC officials had earlier said that the gates they installed in 2018 would make it impossible for a vehicle to enter the tunnel. 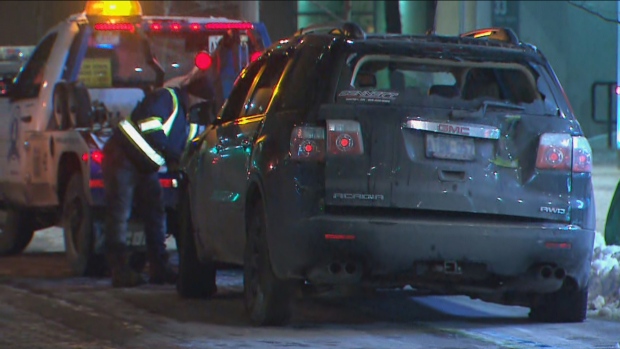 Before 5 a.m., a wheeled loader entered the tunnel with a special boom attached to it to allow it to pull the SUV out of the tunnel.

Green said commuters should expect the tunnel to be closed for several hours.

Yes, an SUV made it through the bollards, past the lights and gates we installed in Oct. 2018 and all the way to the Union Station streetcar platform and got stuck. The driver remained and. @TrafficServices will determine next steps. Shuttle buses run until clear. No ETA yet. https://t.co/aq0Vi2v47w

Shuttle buses are operating along the Harbourfront in the meantime.

Toronto police say the driver was not injured, and they are speaking to him.

The vehicle was pulled out of the tunnel just after 5 a.m.