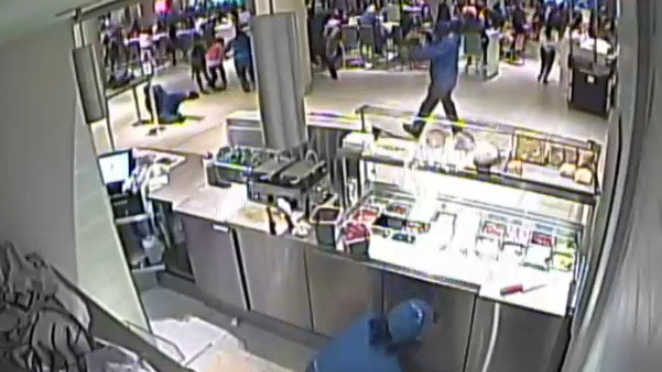 TORONTO -- The man who killed two people when he opened fire at Toronto's Eaton Centre realized he had gotten himself into "some trouble" and knew he was "going away for a really long time," his then-girlfriend said at his trial on Monday.

La Chelle John told the court that her boyfriend -- Christopher Husbands -- made those comments to her just before he turned himself in to police two days after the shooting at the downtown mall in June 2012.

"He said 'I got myself into some trouble and I'm going away for a really long time," John, 23, recounted. "He was just crying, I was just crying and then he just went inside and turned himself in."

Husbands, 25, has pleaded not guilty to two counts of first-degree murder and has denied that he went to the mall with the intention of killing anyone.

The trial has heard that his lawyer plans to argue that Husbands was indeed responsible for the deaths and injuries that resulted from the shooting but that it was a "chance encounter" with a group of five men that prompted him to open fire.

John told the court Husbands seemed "fine" in the hours leading up the shooting.

The couple had gone to the Eaton Centre that Saturday evening so that John could pick up a pair of skates for her son.

After both she and Husbands had made purchases, the couple then went to the mall's crowded food court, John said.

She was ordering sushi as Husbands was standing off to the side holding bags containing their purchases when she heard him yell the word "what," she said.

John said she turned around and saw that Husbands appeared to be talking to a group of people, so she turned back to finish her transaction when she heard "a bunch of commotion" behind her.

"At that stage I just see everyone running and scattering, I didn't know what to make of it," said John, adding that she didn't know there had been a shooting.

"The last time I saw Christopher there was all this commotion and he was running."

Moments later, John said Husbands was nowhere to be seen so she turned back to the sushi counter, retrieved the debit card she had been using to pay for her purchase, picked up the bags Husbands had dropped and left the mall.

She told the court she did not see Husbands with a gun, nor did she know he had carried a gun to the mall that day.

Ontario Superior Court Justice Eugene Ewaschuk, who is presiding over the trial, pressed John on that point.

"Do you see the gun in his hand?" he asked, as surveillance footage of Husbands running away from the sushi outlet was played in court.

"You're looking right at it. Do you remember seeing it?" he went on.

John also said she didn't know what was inside a small black bag that Husbands had slug across his body at the mall.

Later that day, Husbands called John once she was home to ask her if she was ok, she said, and even came over to her apartment very briefly -- but the two didn't discuss the events at the mall.

She said she got a call from an unknown number the following day which turned out to be Husbands.

"He said ' I got myself into some trouble, I'm going to go get myself a lawyer and I suggest you do the same,"' she told court.

In the early hours of the following day, John said she got another call from Husbands.

"He basically said that he's with his lawyer and he's going to turn himself in," she recounted, adding that she went to meet Husbands, who was in a car with his lawyer behind a downtown police station.

John also told Husbands' trial on Monday that he had been attacked about three months before the shooting, suffering multiple stab wounds.

During cross examination, Husbands' defence lawyer, referring to John's earlier testimony during a preliminary inquiry, suggested Husbands had become "paranoid and fearful" after the stabbing -- a statement John agreed with.

Husbands's state of mind is important to the case as his defence is arguing that he didn't go to the Eaton Centre with the intention of killing Ahmed Hassan, 24, and Nixon Nirmalendran, 22.

According to the prosecution, the shooting was the result of bad blood between Husbands and Nirmalendran and friends.

The animosity stemmed from an incident several months earlier in which several men stabbed and robbed Husbands at an east-end home, the prosecution has said.