For Megan Takeda-Tully, the idea came after a good meal—or more accurately, a few good meals.

"I just couldn't stand the amount of takeout waste I was producing."

Takeda-Tully told CTV News Toronto that she originally considered the idea of a reusable takeout container several years ago.

"Really it seems like a pretty simple solution, to replace a single-use container with a reusable container. The process behind that is obviously a little more complex."

And some five years after her original idea, at the beginning of 2020, she launched 'Suppli'—an environmentally-friendly option for people ordering takeout food.

Coming up with a design for the containers took months, including finding the right material (stainless steel), and ensuring that there was no plastic involved. The containers also had to be durable, easy to wash, and airtight to prevent spillage.

Takeda-Tully's background is in finance and she's worked with a number of start-ups. But this is the first time she's taken her own idea to market.

"I thought, you know, let’s kick the tires on this and build it out and see what demand is like and see where we need to make pivots,” the told CTV News Toronto. “And you know at least then we've tried to put things in place, and luckily this seems to have really been taken up."

Currently the service is available in two Toronto postal codes. Users register with the service, and pay a 99 cent fee for each usage.

When they're finished with their meal, the containers are picked up from their front porch or another designated spot. There is also a drop-off location for those who want to return their own containers. 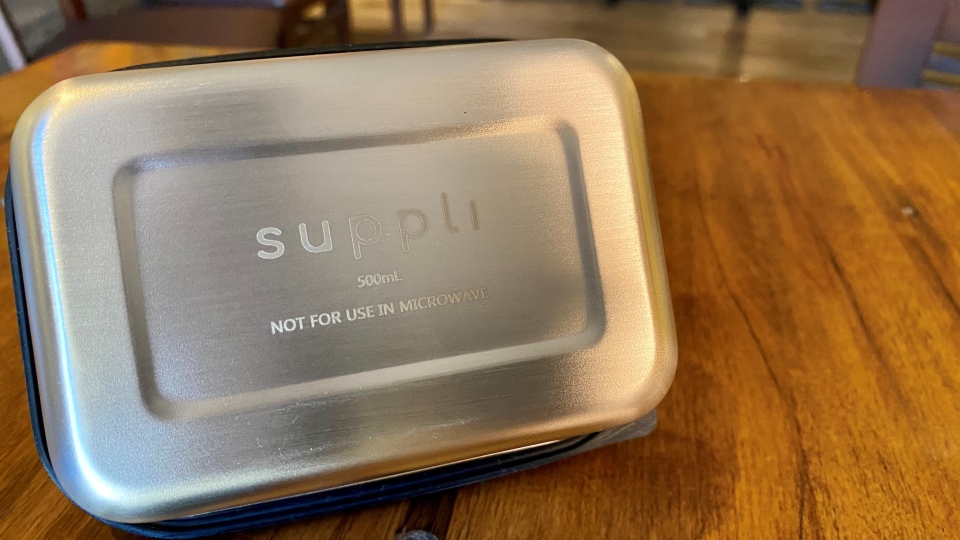 More than three hundred people have already registered for the service, which is currently being used at four different restaurants.

"The pitch to restaurants is really, listen, there's no commitment on your side, give these a try. You're basically getting better quality containers that your consumers are demanding for about a comparable price."

Once picked-up by Suppli staff, the containers are professionally cleaned and sanitized before being put back in to service.

Takeda-Tully says that was a key point in getting restaurant owners onboard.

"A lot of restaurants aren't comfortable taking back dirty containers, especially in a global pandemic right? And, you know, washing them all themselves that's a lot. So we said let us take that out of your hands."

One of the restaurants participating in the soft launch of 'Suppli' is Haldi, an Indian restaurant in Cabbagetown. Staff say the containers have been a hit with customers.

The restaurant opened one year ago and due to COVID-19 much of their first year has been limited to takeout and delivery.

Prabu, and his co-owner Devesh Shirke say from their ingredients to their business model- sustainability is key. Adding that the use of reusable takeout containers is "a very small little part that we can contribute to mother nature."

As for Takeda-Tully, she hopes to eventually grow the 'Suppli' business to restaurants and food shops across the city and beyond.

With Canada promising a ban on single-use plastics by the end of next year, she believes her product could help be part of the solution.

"What we're trying to be is an alternative for restaurants and food shops that doesn't kill their margins."