Durham Region joins most of GTA in making masks mandatory 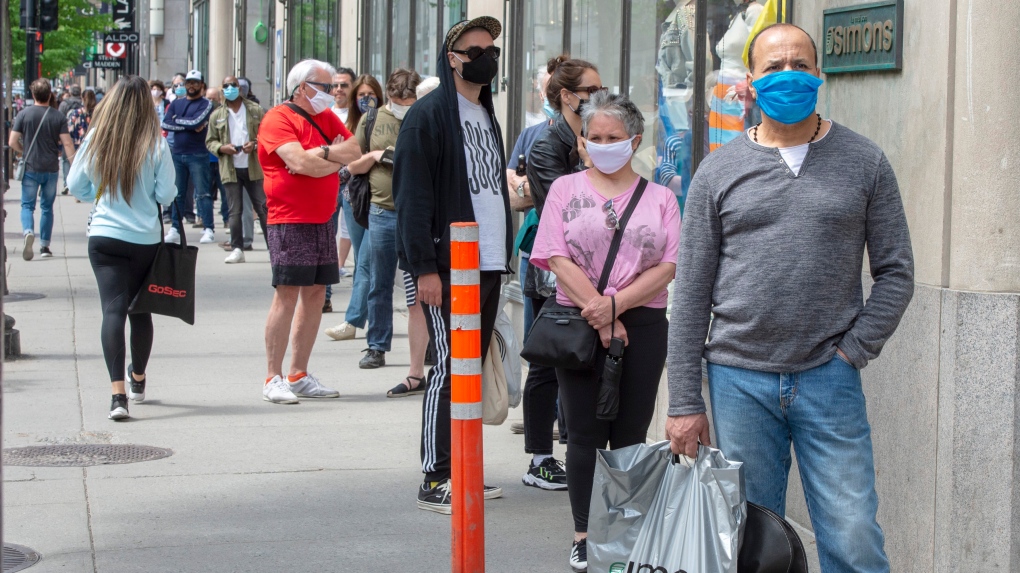 Customers line up at Simon's department store as many non-essential businesses are allowed to re-open Monday May 25, 2020 in Montreal. (THE CANADIAN PRESS / Ryan Remiorz)

TORONTO -- Durham Region will make it mandatory for residents to wear masks within public indoor spaces by the end of the week, joining a number of other GTA municipalities that have already announced similar policies.

He said that as of July 10, all residents will be required to wear masks or face coverings when in enclosed commercial spaces as well as “business offices open to the public” and other public buildings, such as libraries and community centres.

He said that businesses will also be required to “implement a policy for the use of non-medical masks or face coverings” and to “refuse entry when people are not wearing a face covering.”

Children under two are exempted from the policy, as well as anyone with a medical condition that makes it difficult for them to wear a mask.

“There is growing public health evidence that widespread use of non-medical masks or face coverings—when used with other public health recommendations—is effective in the fight against COVID-19,” the statement from Henry reads. “We intend to enforce this policy in ‘good faith’ using it as an opportunity to educate people on the use of face coverings, combined with other recommended public health practices, to help keep our community—and each other—safe.”

Masks will officially become mandatory in all indoor public settings in Toronto as of Tuesday following the passage of a bylaw by city council last week.

Similar bylaws are also expected to go into effect in other GTA communities in the comings days and weeks.

Brampton passed its own mandatory mask bylaw at a meeting last week but it still needs to be ratified by city council on Wednesday. The mayors of Mississauga and Caledon have also committed to making masks mandatory but the proposed bylaws in those communities still need to be considered by their respective city councils as well.

York Region Council will also hold a special meeting on Thursday to consider its own policy after repeated lobbying from Markham Mayor Frank Scarpitti.

In his statement, Henry said that residents do not need to wear a mask or face covering “while eating on a restaurant patio” or “in the workplace where other standards apply” but will have to get use to donning one when in public settings that are enclosed.

It should be noted that the policy is being implemented under powers given to the region’s medical officer of health by the Emergency Management and Civil Protection Act and not through a bylaw, as has been the case in other communities.

The mayors and chairs of the Greater Toronto and Hamilton Area municipalities previously wrote an open letter last week asking the province to issue a blanket order making masks mandatory in large municipalities but Health Minister Christine Elliott refused to do so, citing the fact that local officials already had the authority to implement their own policies.