The driver involved in a devastating crash on Lake Shore Boulevard last week that took the lives of two pedestrians and himself had a history of accusations he caused chaos behind the wheel, documents show.

But even when he was convicted and handed a driving ban, he was among many that simply ignore the punishments and get in the driver's seat anyway -- a phenomenon that frustrates observers and that the Toronto Police Service says it sees literally every day.]

“A two or three thousand pound vehicle driven by someone who is the opposite of law abiding is a killing machine,” said criminal lawyer Ari Goldkind, who says he sees the pattern regularly in his work.

“Whether there’s one driving prohibition or a lifetime prohibition, there are people who don’t care…unfortunately there is no easy solution,” he said.

Police said that pattern played out with deadly results in the crash at Lake Shore Boulevard and Superior Avenue on Thursday. Pedestrians Kelly Hamilton, 43, and Ken Arkwell, 75, were struck and killed by a speeding Cadillac driven by 36-year-old Omar Downey, who also died in the crash. 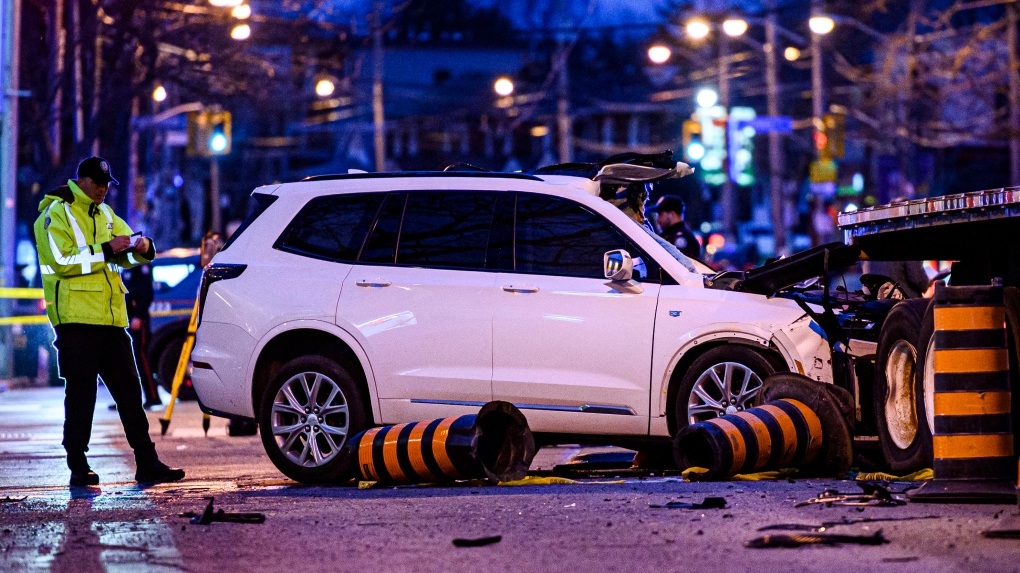 Police attend the scene of a collision in the west end of Toronto on Thurs., March 31, 2022. THE CANADIAN PRESS/Christopher Katsarov

Minutes before, Downey side-swiped a van parked about 2.5 kilometres east on Lake Shore Boulevard at Eighth Avenue. Witnesses and police said he seemed as if he was having a seizure at the time. A video recorded on a cell phone shows passersby and firefighters in a dispute with the driver, who gets back in the Cadillac and drives east, leaving behind shocked firefighters.

“I couldn’t believe it,” recalled one witness to that incident, Steve Haynes. “He definitely needed help, refused it, and jumped in and off he went.”

That incident wasn’t Downey’s first run-in with authorities. In Niagara Region in 2019, Downey was charged with possession of fentanyl and crystal meth, as well as dangerous driving, in a case that news reports said damaged two police cars. Those charges were withdrawn by the crown.

In convicting Downey in February, the judge in that case levied a 30-day sentence and a two-year driving ban on top of a previous restriction.

Police have said the driver was also barred for medical reasons. None of this stopped Downey from getting into a car registered to a business partner on Thursday.

Goldkind said police should be questioning whether that partner lent the keys or knew Downey was prohibited from driving.

“When we prosecute drug crimes we ask, ‘Who’s the dealer who provided the fentanyl?’ Perhaps police need to look at this, for the people caught, whose care are they in? Who is the one who handed them the keys? When those people start to get charged, we might see a life or two being saved,” he said.

“It is a common occurrence that we find this when we are pulling someone over. It’s quite common. It’s a daily occurrence,” he said.

Eric Dumschat of Mothers Against Drunk Driving (MADD) also pointed to studies that show people faced with driving prohibitions find it too easy to get back behind the wheel.

“We know from surveys that a large number of people who are suspended or prohibited continue to drive anyway,” he said.

“It’s depressing. And it can become a tragedy,” he said.

Dumschat said MADD supports moving away from these types of punishments in impaired cases, and towards a style of punishment that focuses on public safety using an interlock device, which only allows the vehicle to start if someone passes an alcohol breath test.

He said the advantage there is that the driver is less likely to face prohibitive insurance rate increases, which can prompt them to get rid of their car and drive other peoples’ vehicles, or simply drive uninsured.

“If you incentivize the interlock, you are incentivizing good behaviour. That protects the public. In recognition of this fact you make it easier and they don’t feel the need to be deceptive,” Dumschat said.

There’s no excuse to drive impaired for any reason, he said, pointing to numerous options in Etobicoke including ride-hailing services, public transit, taxis, or rides from a friend.

Any of those would have served to get Downey from his initial crash site to his most recent listed address in a short time: between 5 and 10 minutes by cab, 12 minutes by streetcar, and 41 minutes by walking.

Nick Kyrgios cursed at the Wimbledon chair umpire and asked, 'Are you dumb?' He demanded to see a Grand Slam supervisor after questioning why his opponent, Stefanos Tsitsipas, didn't forfeit their ever-contentious, never-boring match for angrily hitting a ball into the stands after dropping the second set.