Driver gets $110 ticket for not having front licence plate 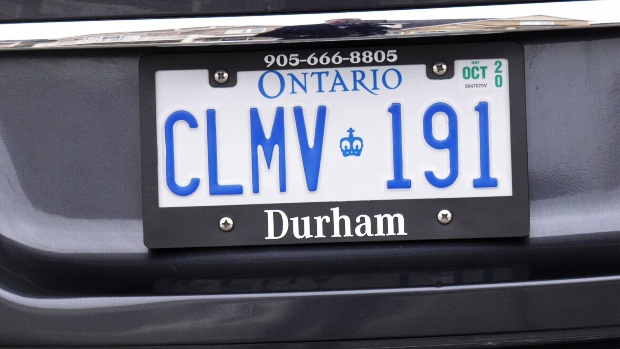 TORONTO -- Durham Police say an Oshawa man who says he was fined $110 for having a dealership frame around his licence plate was actually charged with not having a licence plate displayed on the front of his car.

While having a dealership frame around a licence plate is still an offence, Staff Sergeant Krish Ganeshan of Durham Regional Police told CTV News “Matteo Giordano was not charged with ‘rear plate not entirely visible’, he was actually cautioned with this offence. He was charged with ‘Drive Motor Vehicle Plate improperly Displayed.’”

Ganeshan said “He did not have the front licence plate affixed to the front of the car when he was pulled over.”

Police say when the driver was pulled over he had the front plate inside his vehicle displayed through the windshield.

When CTV News contacted Giordano to ask him why he said he got a ticket for having a dealer licence frame around his plate, he said that is why he thought he got the ticket.

However, he did confirm that he did not have his front licence plate attached to the front of his car and that the plate was on his dash.

CTV News Toronto has looked into this issue before and several dealerships said they were unaware the frames are illegal.

At the time, a Toronto Police Sgt. Clint Stibbe said the safest bet was to have nothing attached to a licence plate.

"The reality is that anytime you put something on your plate you can be charged. The best thing to do is remove any attachments so the plate can be read," he said.

An earlier version of this story stated that Giordano was fined $110 for having a dealership frame around his licence plate.