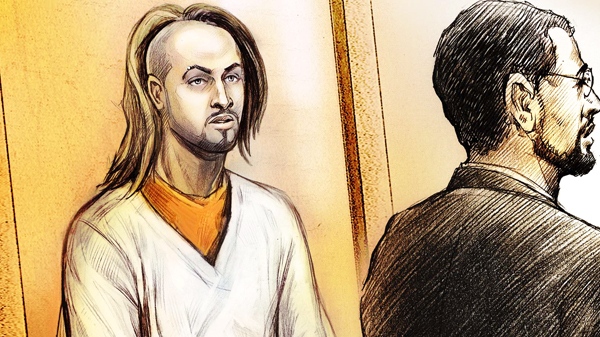 Jason Ortiz is seen in this courtroom sketch on Wednesday, June 8, 2011.

A 43-year-old man was struck several times over the head with a squeegee after he refused to have his window cleaned at a Toronto intersection.

According to police, a man approached the victim's car and started cleaning the window while it was stropped at a red light southbound on Spadina Avenue at Queen Street at about 3:50 p.m. on Monday.

The driver rolled down his window and asked the cleaner to stop. When the cleaning continued, the driver got out of his vehicle and approached the man.

The driver was then punched and repeatedly hit him over the head with a squeegee tool, police allege.

"The assailant took the squeegee and struck the victim over the head a number of times," Const. Tony Vella alleged.

The driver suffered a cut to his head and was treated in hospital before being released.

Jason Ortiz, 23, faces charges of assault with a weapon.