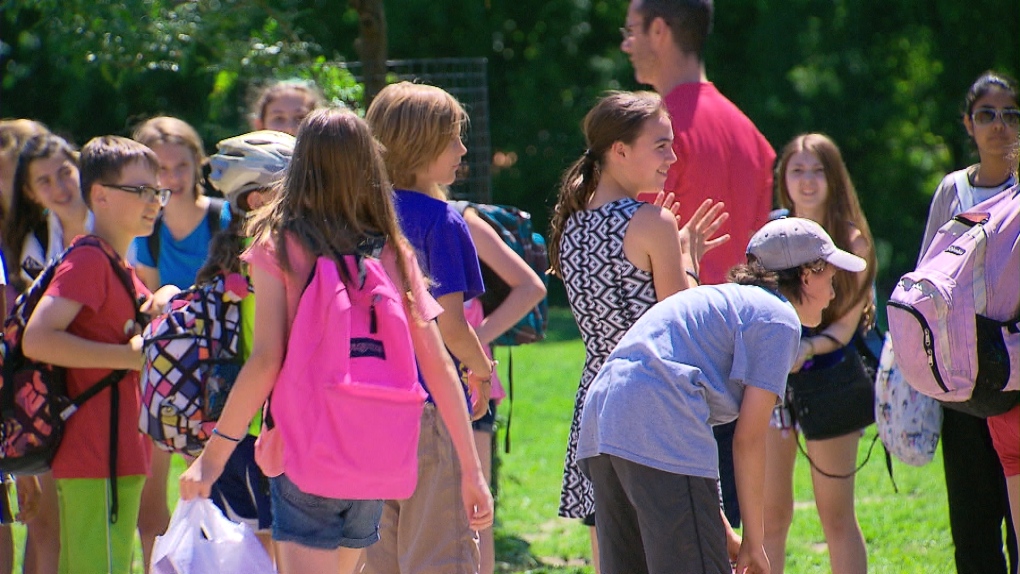 When Karen Green sends her two daughters, aged nine and 12, back to school in September, she knows she'll have to contend with their school's dress code.

The rules prohibit tops with straps narrower than the width of three fingers; skirts, shorts or dresses shorter than the length of extended fingertips when a student's arms are extended down the sides of their body; and abdomen, back and shoulder-baring tops, among other things.

Green believes the dress code unfairly targets girls in a certain age group -- those in Grades 6 through 9, who are likely going through puberty.

"It's not my child's issue to make sure that nobody knows she's wearing a bra. It's everybody else's issue to accept what a growing girl's body looks like, and to not be distracted by it," says Green, whose children attend a school in Chatham, Ont.

The message such dress-code rules send, she argues, is that as soon as girls start to develop, their bodies must be policed.

"It is something that they must be completely aware of covering at all times," says Green, adding that girls who develop earlier are not allowed to wear the same clothes as their friends. "It instills a sense of shame."

Every year stories surface of girls being told to go home to change into clothing that adheres to local dress codes.

In one expert's view, telling girls how to dress implies that it's their job to make sure that boys aren't distracted by their bodies, which is insulting to both sexes.

"Boys are basically represented as prisoners of their hormones. (They) just can't help it and it's not their fault. Girls, on the other hand, are seen as the gatekeepers of morality," says Shauna Pomerantz, a Brock University child and youth studies associate professor and author of "Girls, Style and School Identities: Dressing the Part."

Schools have used dress codes to "control" students, she added.

"In many people's minds, how you look equates to how you act," Pomerantz says.

He notes that principals are the ones who establish dress codes, which reflect community standards, and that the process includes consultation with parents.

"(Dress codes) are defined by the communities that the schools operate in. It's a process designed to get input from parents through the school council," Sherman says. "They want to have a safe, respectful learning environment."

The Toronto District School Board also said their dress code policy is developed through "a conversation with the whole school community." Spokesperson Shari Schwartz-Maltz acknowledged, however, that some schools haven't updated their dress code in many years.

For some parents, dress codes help create an environment where everyone can be comfortable.

Toronto parent Terry Perdue, a single mother of five, recalls a November 2016 incident when one of her daughters was told by a teacher that her V-neck sweater was too low-cut to be worn on its own. Perdue also received a phone call from the teacher during the school day.

"It was awkward," she says. "The teacher explained to me that (her cleavage) was distracting the male children in the classroom."

Perdue says her daughter was in Grade 9 at the time, at a school that's part of the Toronto District School Board. The school's dress code, among other things, states that it is unacceptable for cleavage and undergarments to be showing.

Her daughter's undergarments weren't exposed, but the teacher suggested she wear a T-shirt underneath the sweater, Perdue says. He also mentioned that her daughter was one of three girls in the class.

Despite the fact that her daughter was embarrassed and offended by the incident, Perdue says she understood where the teacher was coming from. She describes her daughter as a bigger girl who developed early.

"I think you should be able to wear whatever you feel comfortable in as a (girl), but you got to think of other people too, especially teenagers and all their hormones," Perdue says. "You can't be judgmental."

But one former school board chair rejects an argument often made in support of dress codes -- that certain clothing that girls wear might make boys uncomfortable.

"We need to raise (and educate) our boys to respect and not sexualize the clothing that (girls) choose to wear," says Patti Bacchus, a former Vancouver School Board chair and trustee, who believes it's important to include students in discussions about dress codes.

Schools should focus on supporting students and ensuring they have the best learning opportunities available instead of policing the width of a shoulder strap, she says, arguing that she doesn't see how dress codes improve learning.

"I question the need for them," Bacchus says. "We need to teach students to respect other students' bodies, their individual rights and diversity."