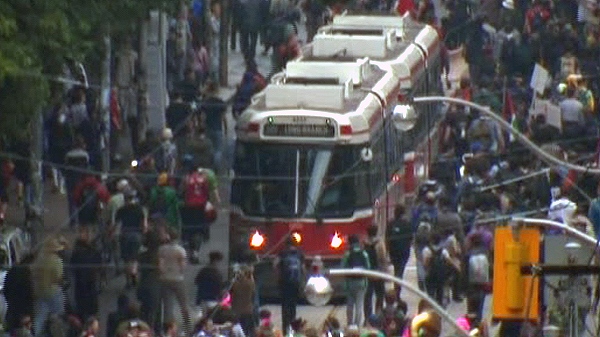 A TTC street car is blocked by a protest on Queen Street West in downtown Toronto, Saturday, June 26, 2010.

As protesters wrought destruction in the Toronto's downtown core, transit was disrupted, businesses were shuttered and public buildings were locked down.

Late Saturday night, the Toronto Transit Commission announced that the downtown loop of the Yonge-University-Spadina line between St. George and Bloor stations, would remain closed for the night.

Streetcar service was also called off between Spadina and Broadview Avenues south of Bloor, adding to a series of previously announced route changes meant to circumvent the summit.

Although the TTC launched a free shuttle bus service to transport inconvenienced customers traveling from Bathurst station to Front St. as well as along Parliament between Castle Frank station and Front St, other regular bus and streetcar service was halted.

As peaceful march turned violent on Queen Street Saturday afternoon, businesses that had been open started closing down.

The Eaton Centre was placed on "hard lockdown" by mall security around 3:30 p.m. as an anarchist faction cut a destructive path through the area.

Hospitals near the march route were also restricting access, only allowing patients, their relatives, and staff wearing identification badges to enter, according to the University Health Network. Security guards were monitoring entrances, but patients requiring emergency care were reminded they could still access hospital services in the area.

As the afternoon progressed, a concert by Dutch violinist Andre Rieu slated for the Air Canada Centre was cancelled in light of ongoing chaos near the venue.

GO Transit also cancelled service to downtown Toronto along the Lakeshore east and west lines, replacing that service with free shuttle buses running along the corridor from Danforth GO Station to the Oshawa GO Station in the east and from Mimico station to Hamilton in the west. Those services were to leave at 11 p.m.

Drivers faced their own delays as lane reductions and delays on major highways around the city as slowed traffic.

City officials and police have long warned the summit would affect transportation to and through the city's downtown core. In the days before the summit, many motorists avoided the designated "Traffic Zone," easing congestion in the city.

Organizers at BMO Field, where the Toronto Football Club was scheduled to play, urged the public to plan an appropriate route and allow for delays in reaching their destination.