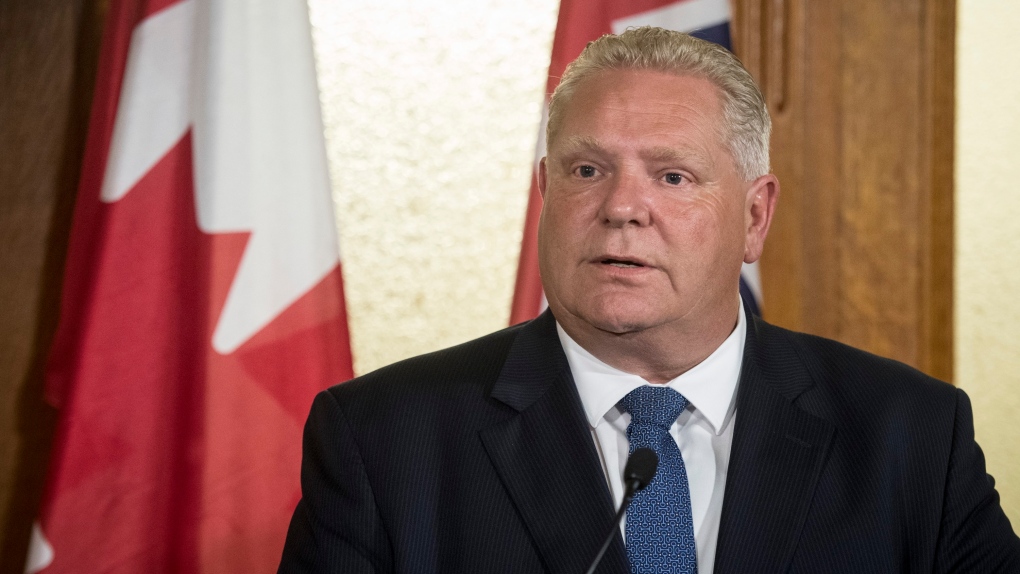 TORONTO -- Doug Ford says the fate of Ontario's carbon tax court challenge will be decided after the federal election, raising the possibility that his government could end up abandoning the legal action.

When asked Friday what he would do if Prime Minister Justin Trudeau's Liberals are re-elected on Oct. 21, the premier said he would have to re-assess Ontario's position.

"We'll sit down and consult with the attorney general ... We'll be consulting with the cabinet and then we'll move forward from there," he said

Federal Conservative Leader Andrew Scheer has said he would scrap the national carbon tax if his party forms government.

Voters, Ford said, would have the ultimate say.

The Progressive Conservative government lost its case against the federal carbon price at the province's top court in June and said it would appeal to the Supreme Court.

Ford's spokeswoman Ivana Yelich said Friday that the government believes the carbon tax is a "cash grab under the guise of environmental policy" and will do everything it can to fight it.

Other provinces, including Saskatchewan, Alberta and Manitoba, are also challenging the carbon price in court.

A spokesman for Saskatchewan Premier Scott Moe said Friday that the province's legal action will continue, regardless of the outcome of the election.

"Our government believes that the federal election provides a significant opportunity for voters in Saskatchewan and across Canada to soundly reject the harmful and ineffective federal carbon tax," Jim Billington said in a statement.

"However, we recognize that an important question of jurisdictional authority will continue to exist no matter which federal party is elected come October."

"What's really causing the premier to consider backing down is people's overwhelming desire for climate leadership," he said in a statement. "No one wants a premier who will waste tax dollars sabotaging solutions when the local and global impacts of climate change are becoming more and more dire."

"If Premier Ford wants to stop wasting our tax money on efforts to stop other governments from filling the hole he has created in Canada's response to the climate crisis, then he should cut his losses and do it now," said the group's senior energy strategist, Keith Stewart.

The Ontario government has pledged to spend approximately $30 million fighting the federal carbon price in court.

It's also using some of those funds to wage a public relations battle against the federal Liberal government that includes making gas station owners stick anti-carbon tax stickers on pumps across the province by the end of next week.

Ford said Friday that gas station owners who don't put the stickers on their pumps will face fines but stressed that they would be less than the maximum penalty of $10,000 a day.

The law lets the Tory government send inspectors to see if gas stations are properly displaying the stickers and sets out penalties for non-compliance.

The blue stickers show the federal carbon tax adding 4.4 cents per litre to the price of gas now, rising to 11 cents a litre in 2022.

The sticker plan has drawn condemnation from the opposition parties, business groups and the threat of a legal challenge from the Canadian Civil Liberties Association.

-- with files from Stephanie Taylor.