Doug Ford's live news conference on Friday was unexpectedly interrupted after the premier swallowed and choked on a bee.

“I just swallowed a bee,” Ford said after momentarily choking during a media availability in Dundalk, Ont.

Ford was in the small rural area southwest of Barrie to announce an investment of $500,000 in the Ontario-based company Greenlid, which produces compostable and sustainable products.

The insect could be seen flying around the premier’s head before landing on his lower lip and eventually making its way down his throat.

“I’m good, he’s down here buzzing around right now. He has a lot of real estate,” Ford exclaimed as he reached for a bottle of water.

Ford was a good sport about the incident and told reporters in attendance to replay the “blooper.” 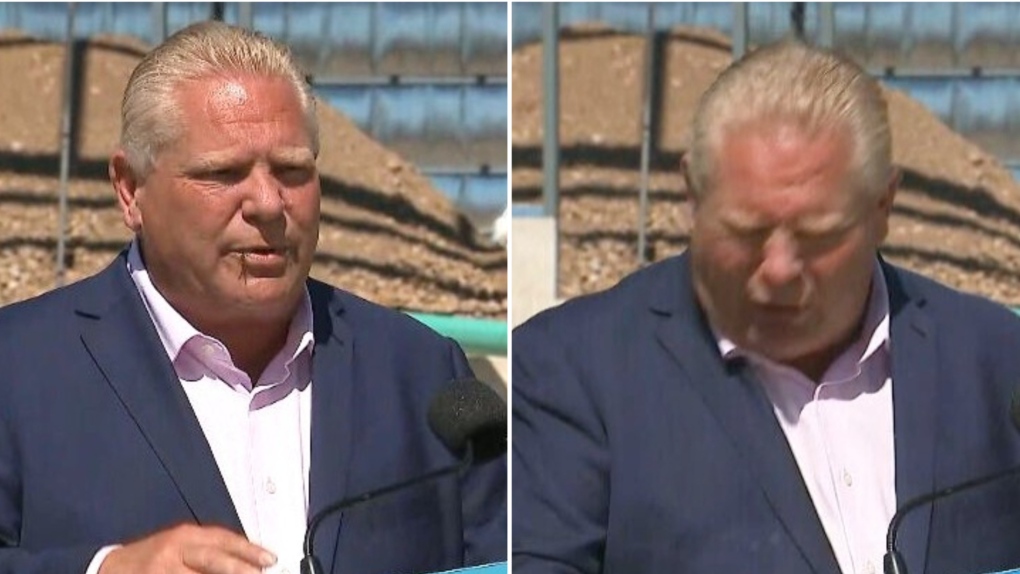 Ontario Premier Doug Ford is seen choking on a bee during a news conference in Dundalk on Friday August 12, 2022.

“That’s a good one. That’s the best I’ve ever seen,” he said as the news conference concluded.

A spokesperson for the premier said he is "doing well" following the incident.

Ford was in the middle of responding to a question about Ontario’s health-care staffing crisis and recent comments by Health Minister Syvlia Jones regarding the further privatization in the sector.

Jones had said that "all options are on the table" Wednesday when discussing staff shortages at Ontario hospitals which have seen some emergency departments close their doors this summer.

The new health minister was pressed on the issue during question period a day later to which she appeared to backpedal and said "OHIP cards are used in the province of Ontario to fund publicly funded health-care systems -- that will continue under our watch."

Over 365,000 Maritimers still without power in Fiona's wake

Strong winds and heavy rainfall from Fiona have left over 365,000 Maritimers still without power, as of 11 a.m. Sunday.