Premier Doug Ford is calling on the United States to end its “Buy America” policies, arguing that Canada should be exempt from American protectionism.

During a fireside chat at the North American Strategy for Competitiveness (NASCO) summit in Ohio, Ford suggested U.S. President Donald Trump should rethink his America-first stance -- especially when it comes to Canada.

“God bless the president,” Ford told a business audience Friday. “Full disclosure: I’m a big Republican, I’m a supporter and conservative minded. But this protectionism is just not going to work.”

Ford suggested that Canada and the United States should adopt a “buy North America” strategy because “when we work together, we’re unstoppable.” 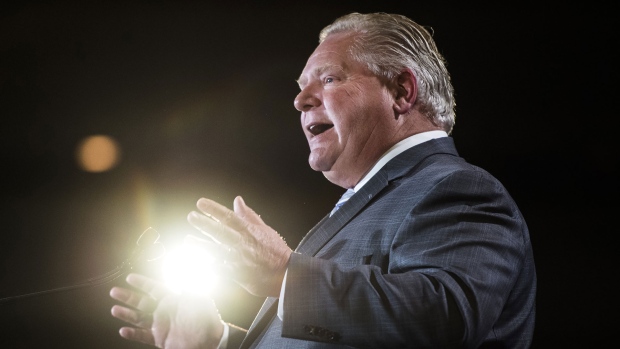 Ford has made similar remarks in the past, especially in the wake of what he called “job-killing tariffs” imposed by the U.S. on Canadian exports of steel and aluminum. The move led to retaliatory tariffs imposed by the Federal government on $16.6 billion worth of goods imported from the U.S.

Earlier this year the two countries resolved the cross-border duty dispute, when the Trump administration agreed to lift the tariffs on steel and aluminum while Canada agreed to do the same.

Ford stresses, however, that the “protectionism mentality” needs to go, especially with an estimated “three million jobs at stake.”

“We’re your largest trading partner, closest ally, largest unprotected border in the world,” Ford said “Canadians look at the United States as their big brother and the old saying in Canada is when the U.S. sneezes, Canada catches a cold.”

“I would love to see an exemption for Ontario.”