Don't like ballot choice? 'None of the Above' an option for Ontario voters 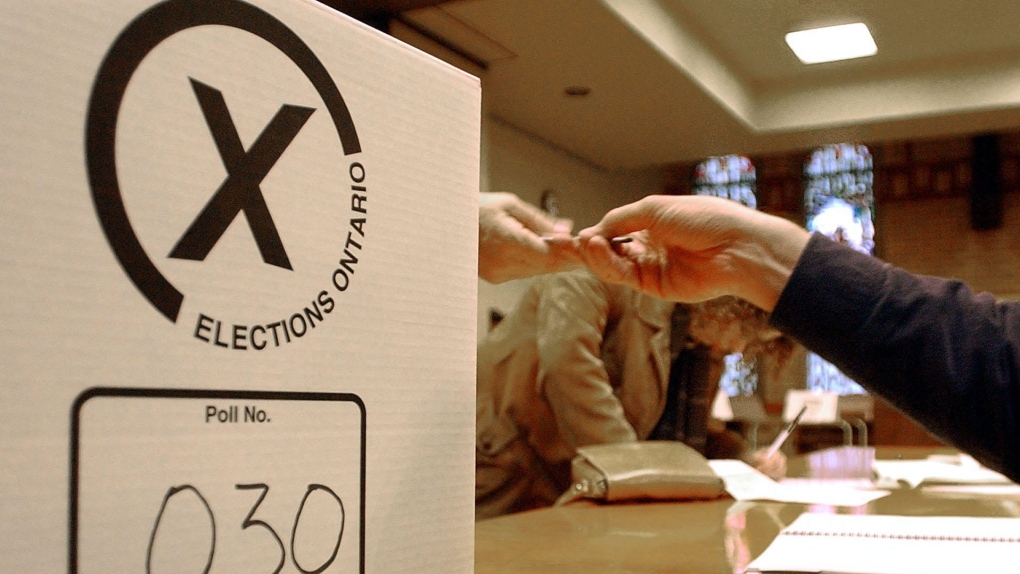 A unidentified voter takes her ballot at the Church of The Redeemer in Toronto Thursday October 2, 2003. (CP / Aaron Harris)

TORONTO -- Ontario voters fed up with the offerings of the mainstream political parties may feel sorely tempted to vote for none of the above come election day -- and one party is well placed to capitalize on the sentiment.

Registered for the June 12th election is the None of the Above Party of Ontario -- or NOTA -- whose main plank is to press for elected politicians not bound by party control along with recall and term limits.

"Almost nobody knows we even exist and as soon as people do, they're sending emails for lawn signs," said leader Greg Vezina, a founding candidate for the federal Green party in 1983.

"I've only got candidates in eight ridings but I've got requests for lawn signs from Thunder Bay to Ottawa."

Half of voters don't bother to cast ballots while the other half want something different, said Vezina, who is running west of Toronto.

If voters find him NOTA good choice, they do have plenty of other options among the 20 registered parties.

They include Canadians Choice, Family Coalition and the Ontario Moderate party, along with John Turmel's Pauper Party of Ontario.

For Turmel, who is in the Guinness World Book of Records for running and losing in more elections than anyone else, this will be the 80th election in which he's been a candidate.

"This is my third hat trick," Turmel said proudly.

"Back in '80 and '82, I managed to pull off running in federal, municipal and provincial elections simultaneously."

If elected premier, Turmel said, his first act would be to decommission nuclear power stations, which he calls the "biggest threat to all our lives."

Besides adding some spice or even frivolity to the serious business of democracy, fringe parties, which collectively picked up about 54,000 votes in 2011, often press issues the main parties aren't discussing.

For example, the Equal Parenting Party's two candidates are adamant changes are needed to reform family law, which they say tends to favour mothers over fathers.

"If you want to divorce and you have children, it will be a 50-50 deal as far as time spent with, and money spent on children goes," the party says on its website.

"This forces a mother to bargain and gives a father something to bargain with."

Another party fishing for votes is the Vegan Environmental Party, which bills itself as "the voice for animal rights" with a platform focused on animals, the environment and social justice.

Among other things, the Vegans would end government subsidies to animal agriculture.

Brand new on the election scene is the Moderate party, which is also fielding two candidates this time round, although the aim is have up to 30 next time around.

The Liberals and Conservatives are basically part of the same system, Moderate Leader Yuri Duboisky said.

"That system is broken," said Duboisky, who isn't doing any door knocking.

"It's not able to adjust to economic challenges so the province is going down steadily."

The Moderates admit they aren't ready to govern but are pushing issues such as more hydrogen-fuelled cars, rooftop wind turbines and decriminalization of "minor drugs" such as marijuana.

Despite the plethora of choice, some parties simply never made it to the ballot.