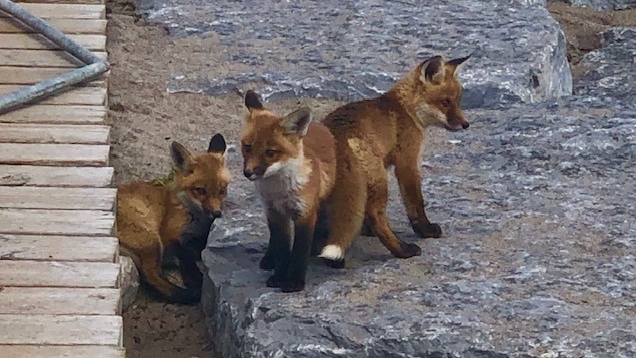 Officials are asking residents not to feed a family of foxes that have been living in The Beaches. (Twitter/Toronto Wildlife Centre)

TORONTO -- The City of Toronto is asking residents to stop feeding a family of foxes that have made a boardwalk in The Beaches their home.

The city posted the warning on social media saying they are aware of the fox and her babies in the east-end and asked residents not to gather to watch the animals.

“Never touch wildlife or pick up their young. Keep your dogs on leashes,” the city said.

Shortly after, the Toronto Wildlife Centre issued a similar warning to residents saying there have been numerous sightings of red fox families in Toronto, “most notable the ones living under the boardwalk in ‘The Beaches.’”

“Foxes have adapted well to surviving in urban environments, and some have no choice but to make their dens in areas frequented by people. Although they’re a wonder to watch, especially to see fox kits playing, keeping your distance from them is crucial,” the wildlife centre said in a post to social media.

The centre said that individuals have been spotted hand-feeding the baby foxes and taking photos in close proximity to the animals. They warn that this activity puts the kits at risk of becoming habituated to humans and creates obstacles for their parents who need to bring them food.

“Feeding the babies, although well-intentioned, is a huge danger for them and will negatively affect their development into normal adults,” the centre said.

“These foxes can thrive living in the city, but only if they’re left alone.

The centre said that city officials set up barricades and warning signs around the den but they have since been removed.

“We are currently working with the city to get new barricades back around the den, but the public needs to know to leave this family be.”

Both city officials and the wildlife centre are asking anyone who sees someone feeding the foxes to report it to 311.

Do not approach this family as the fox needs space to raise her young. Do not ever feed wildlife as providing food to wildlife is harmful for their health & well-being. If you find injured or abandoned young wildlife, call @311Toronto so @TOAnimalService can attend if necessary.