A local dog owner says she’s warning residents about the high number of ticks she’s found, despite the chilly weather, while walking her furry friend in Rouge National Urban Park.

Tiffanie Caracassis said she usually walks her dog in High Park but on Sunday, she joined a group of dog owners at Rouge Park. She said she and the group were shocked at the number of ticks they had to remove from their dogs after the walk.

“In total now there were nine ticks that we found on her,” Caracassis said. “After bathing her, after combing her, we found a tick on her face.”

Ticks are small insects that have the potential to cause serious health issues. Blacklegged ticks, also known as deer ticks, carry bacteria that can cause Lyme disease.

Caracassis said she and the group were on the Orchard Trail, generally stuck to the paths and had their dogs on leashes. But at one point, they did venture near some water with tall grass nearby, she said.

She thinks that may have been where the dogs picked up the ticks. 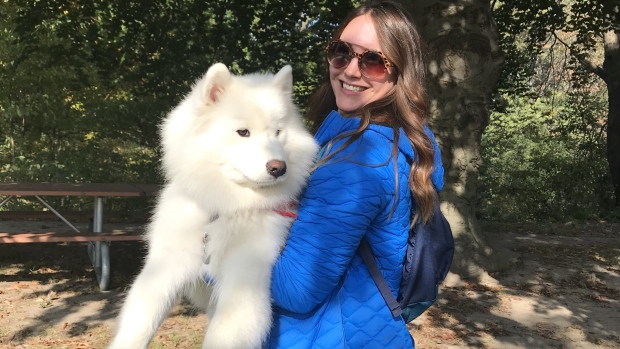 Tiffanie Caracassis, a Toronto resident, says she found numerous ticks on her dog after a walk in Rouge Park.

The dog owners said they were unaware that the Rouge Valley system in Scarborough is known for having large numbers of ticks, in particular the black-legged species which can carry the bacteria known to cause Lyme disease.

In 2018, Toronto Public Health found 35 black-legged ticks carrying the bacteria, which cause Lyme disease. All of the ticks were found in Scarborough parks, including Colonel Danforth Trail, Rouge Park and Upper Rouge Trail.

In High Park, where Caracassis normally walks her dog, black-legged ticks have been found but all tested negative for the bacteria.

“I would say in recent years, the only months that I haven’t seen ticks are January and February,” she said.

She said that residents can bring the tick in for testing to a vet. If there are concerns a pet may have Lyme disease, they can do a blood test after six weeks, which is when the body begins to show an immune response to the bacteria, she said.

There are also medications to prevent ticks from biting a pet, and even a relatively new vaccine against Lyme disease for animals, she added.