TORONTO -- The owners of a 12-year-old golden retriever are looking for accountability after they say an attack at an off-leash park in Vaughan left their dog with serious injuries.

Steven and Sandy Klein became foster parents to Benji in May through a program that pairs rescue dogs with a temporary place to live until they are able to find a forever home.

According to the Kleins, Benji had been neglected for eight years, and needed dental work and grooming, including care for his paws.

“Benji is a gentle old soul who has been through a lot in his life,” Steven Klein told CTV News Toronto on Tuesday. “We just fell in love with him. He’s such a wonderful guy.” 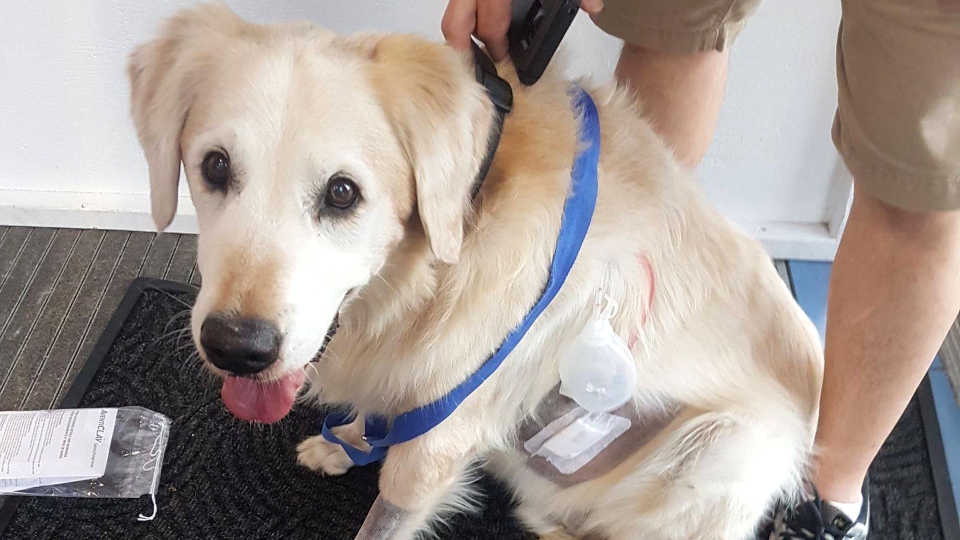 On Sunday, Benji was running free at an off-leash dog park in Concord, near Highway 7 and Dufferin Street, when he was seriously injured in an unprovoked attack, Klein said.

“I heard this really violent growling sound and I looked to my left and I saw Benji being chased down by a rather large dog and I heard him yelp,” he said.

Klein said Benji suffered a wound to his mid-section at the time, but admitted that he did not realize how severe it was until after they had left the park. He said no contact information was exchanged with the other dog’s owner.

According to the Kleins, Benji underwent surgery that night, which had a price tag of $1,000. He now has stitches and a bag to drain fluid from the wound. He is in the process of recovering and is moving slowly, his owners said.

A sign at the public off-leash park reads owners are responsible for any injuries caused by their dogs.

The Kleins said they filed a police report but were told there is not much that can be done with the little information they have.

Steven Klein said he is hoping the dog’s owner will reach out.

“It would be great if the owner of the dog came forward and took responsibility for it and reimbursed us for the medical bill,” he said.

Anyone with further information is asked to contact York Regional Police.