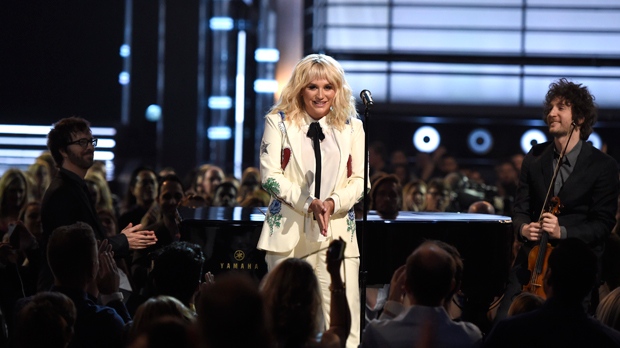 Ben Folds, left, and Kesha perform “It Ain’t Me Babe” at the Billboard Music Awards at the T-Mobile Arena on Sunday, May 22, 2016, in Las Vegas. (Photo by Chris Pizzello/Invision/AP)

Celine Dion and Kesha, both in the midst of drama in their personal lives, gave emotional performances at the 2016 Billboard Music Awards on Sunday.

Dion sang Queen's "The Show Must Go On" in strong form Sunday, sporting a shiny dress and backed by a powerful orchestra. Dion lost her husband and brother in the same week in January, and her son presented her with the Billboard icon award after her performance.

"I'm so sorry. I'm sorry for crying. I want to be so strong for my family and kids ... I don't want to cry in front of you," a teary Dion said to Rene-Charles Angelil. "Thank you very much ...This is such a tremendous honour ... Music has been my passion since before I can almost remember."

Dion said her late husband Rene Angelil will "continue to watch over me from up above."

Kesha sang a heart-wrenching cover of Bob Dylan's "It Ain't Me Babe" at the T-Mobile Arena in Las Vegas. She stood still in a cream suit and was backed by a pianist and violinist, hitting all the right notes and growing teary-eyed near the end.

She earned a standing ovation from the audience -- a welcome response after the performance was initially nixed by her former mentor, Dr. Luke. The hit-making producer and his record label reversed the decision after Kesha said she would not use the stage to discuss their ongoing lawsuit.

Other performances were not as strong: Justin Bieber sang his hits "Company" and "Sorry" with the help of a backing track as bright laser lights beamed throughout the performance. He walked from side to side, performing a few dance moves but didn't match the energy of his backup dancers.

Britney Spears -- clearly lip syncing -- kicked off the show in a shimmery red number with a performance that featured several of her hits, from "I'm a Slave 4 U" and "Toxic," and some of her signature dance moves.

Demi Lovato's performance of "Cool for the Summer" was among the night's best. She also made a statement by wearing a shirt featuring an inclusive bathroom symbol, taking a stance against North Carolina's recent law addressing LGBT rights and bathroom use by transgender people. Lovato, who is on tour with Nick Jonas, recently cancelled shows in North Carolina in protest of the state's law.

Pink also impressed with her performance -- featuring her signature high-flying moves -- while she sang her new song, "Just Like Fire." Rihanna was also a highlight with strong vocals when she sang "Love on the Brain."

Madonna will close the show with a tribute to Prince, who died on April 21 at age 57. The icons collaborated on "Love Song" in 1989.

Leading nominee The Weeknd is nominated for the night's big prize -- top artist. His competition includes Adele, Taylor Swift, Bieber and Drake. The Weeknd won top R&B song for "The Hills" and top hot 100 artist, which he dedicated to Prince.

"I want to dedicate this award to the late, great Prince," he said after accepting the first award of the night. "I love him so much. I didn't know him, but he was so close to me. He will always be an inspiration."

"I can't believe I've won another one," Adele said in a video message. "This record was quite a mission to make."

Adele didn't attend the show because she is on tour, but the awards show premiered her music video for "Send My Love (To Your New Lover)."

Ciara and Ludacris are hosting the show, and the rapper opened the show by poking fun at this year's Academy Awards, which featured all-white acting nominees.

"Unlike the Oscars, we actually have black nominees," Ludacris said to laughs.

"Whoa," Khalifa exclaimed as his mother cheered him on from the audience.