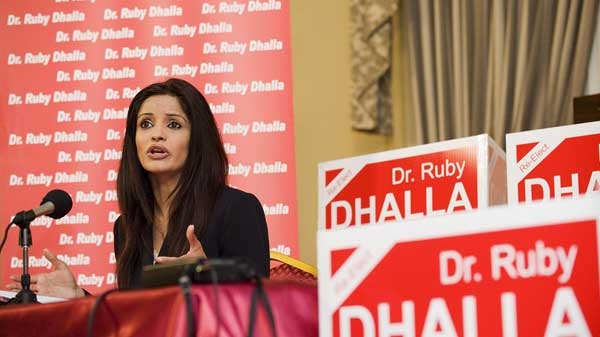 Ruby Dhalla, Liberal candidate for Brampton-Springdale, holds a news conference in Brampton, Ont., Wednesday, April 27, 2011. Dhalla was talking about the abuse of power scandal involving Parm Gill, the Conservative candidate for Brampton-Springdale, and his relationship with Jason Kenny, the Minister of Citizenship and Immigration. (Aaron Vincent Elkaim / THE CANADIAN PRESS)

Liberal candidate Ruby Dhalla has alleged that her Conservative rival, Parm Gill, may have inappropriate access to Citizen and Immigration Minister Jason Kenny.

Dhalla urged Auditor General Sheila Fraser to look into the matter at a news conference on Wednesday.

She accused Gill of offering residents in her Brampton-Springdale riding to obtain visas for their families, in order to buy more votes in the upcoming election.

With a large South-Asian population in the area, Dhalla said that immigration is a central issue and that the unelected Gill has branded himself as Kenney's official delegate on visas.

"No political party in our country should be utilizing the Ministry of Citizenship and Immigration for the purpose of buying ethnic votes," Dhalla said.

In a statement, however, Gill said the accusations are false, calling it "mudslinging" by his opponent.

"I am proud of the fact that when newcomers ask my volunteers for information on the immigration system, whether it's wait times in different categories or where to find an immigration lawyer or representative, we have helped them find that publicly-available information," Gill said in a statement.

He also denied accusations that he travelled on government trips and made official announcements on behalf of the government. Gill said he has never been employed by anyone in the federal government.

While no residents have contacted Dhalla to say that Gill has offered to assist them, she urges them to come forward with information.

"There is a great culture of fear, of intimidation," Dhalla said.

"Individuals that have been helped are fearful that if they come forward they will put their own particular files in jeopardy," she said.

According to previous media reports, Kenney has called the allegations ridiculous and says residents may be turning to Gill because they are not getting the help they need from Dhalla. She denies the accusation, countering that she has helped thousands of people