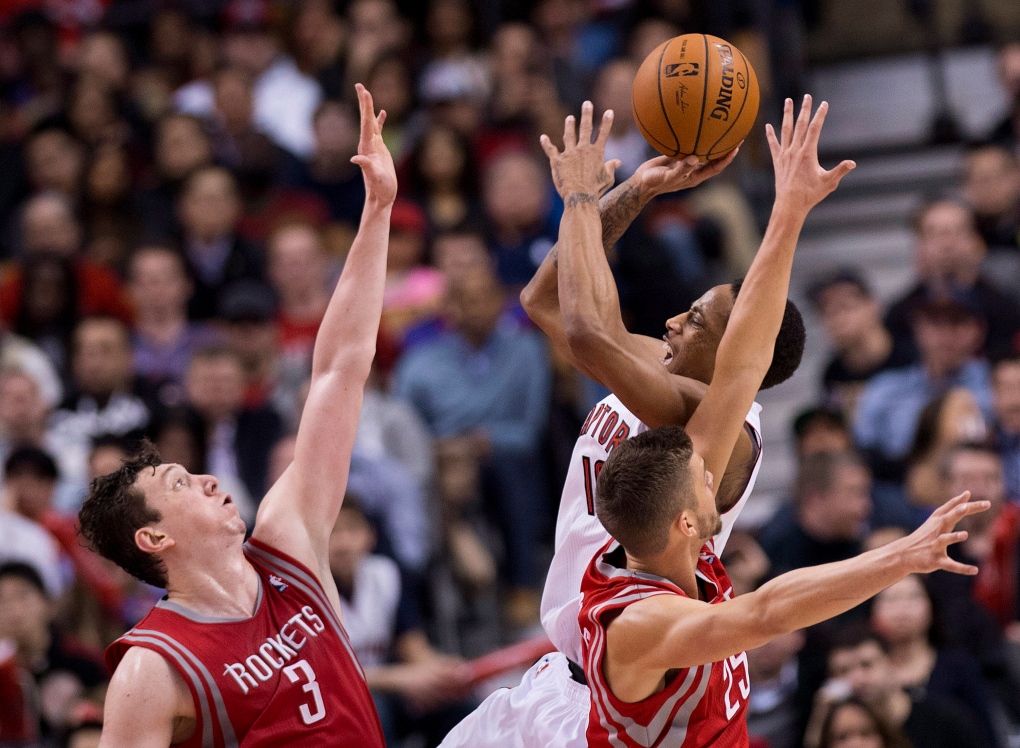 TORONTO -- The clock was ticking down and the Toronto Raptors were clutching a one-point lead. And Kyle Lowry, the player who has so often carried them down the stretch, was in the locker-room getting treatment for a sore and swollen knee.

But with DeMar DeRozan leading the way, the Raptors showed the resiliency that has become part of their makeup this season en route to a 107-103 victory over the Houston Rockets on Wednesday.

"Every win is great for us right now for what we're trying to do, especially with Kyle out and Amir (Johnson) out," said Raptors coach Dwane Casey. "Hopefully it gives our guys some confidence. . . guys who stepped in, to go where we need to go."

Johnson missed all but the first three minutes with an ankle injury.

DeRozan poured in 29 points, and was key in the fourth quarter, doling out a couple of assists and uncharacteristically taking a charge.

"Those are the winning plays that he's learning to make and he's making now, other than just scoring," Casey said. "He's doing a great job of scoring but there's so many other things when he plays those kinds of minutes, especially now with Kyle out, he's got to do a lot more."

When he somehow cut his finger with just over three minutes to go, he continued to play despite the blood that was smeared across his shorts.

"I kind of split the middle of my hand, the webbing of my hand, I didn't even notice," said DeRozan, who estimated he had four or five stitches. "I looked down and my whole hand was soaked."

Jonas Valanciunas and Greivis Vasquez added 15 points apiece, and Terrence Ross finished with 14 for the Raptors (43-32).

Lowry missed the game after a hard knee-on-knee collision with LeBron James in the Raptors' 93-83 loss to Miami two nights earlier. His X-rays were negative, so there was no structural damage.

Johnson played the first three minutes but headed to the locker-room with a sore right ankle.

But despite the absence of not only two of the team's top contributors but arguably its two hardest workers, the Raptors weren't going to let this game slip away. With seven games to go, every game is meaningful as the Raptors fight for a favourable opponent in the post-season and homecourt advantage.

Vasquez, who started at point guard, said it's no surprise that DeRozan and the Raptors stepped up so well in Lowry's absence.

"It's not hidden that (DeRozan and Lowry) are our leaders. We go as they go. And everybody else understands that," said Vasquez.

"This is not a fluke. We earn wins, and we earned a win tonight."

Houston, which has now dropped seven straight decisions in Toronto, was coming off a 105-96 loss the previous night at Brooklyn, and arrived in Toronto at 3 a.m. Wednesday.

The Raptors led by as much as 20 points in the third against the fourth-place team in the mighty Western Conference. But they allowed the Rockets to pull within 90-80 heading into the fourth and it was during a stretch in the final 12 minutes that the Raptors really felt the absence of Lowry and Johnson.

The Rockets pulled within two points with 8:45 to play but that was as close as the visitors would get, and when a wide-open Ross drained a three-pointer with four minutes to play it brought the crowd to its feet and gave Toronto a six-point lead.

There were some tense moments as Houston showed some life late. Jeremy Lin drained a three-pointer to cut Toronto's lead to three points with nine seconds left, but a free throw by Vasquez sealed the Raptors' victory.

"We are a team that is desperate for a win right now," Lin said. "We've dropped three in a row, definitely not a good feeling. We just have to regroup. The one thing I will say is that I'm proud of how hard we played but we didn't play great in terms of execution, in terms of coverage and a lot of those little things."

As for Lowry's knee injury, Casey said sitting his starting guard wasn't a matter of getting him rest. Wednesday's game was one the coach really wanted to win, so if Lowry could have played, he would have.

"But it's not live or die or anything like that, we're not going to risk a kid's health to try to do that."

Johnson, who's averaging 10.8 points and 6.8 boards, has long battled bad ankles, but the hardworking forward normally plays through the pain. The fact he left the game is worrisome.

The Raptors are tied with Chicago for third in the Eastern Conference and two-and-a-half games ahead of Brooklyn. The good news is Wednesday's game was the Raptors' last against a Western Conference opponent. And of the remaining games, Toronto plays last-place Milwaukee twice, and Philadelphia (second-last) once.

The Raptors got off to a sloppy start, falling behind by 12 points midway through the first quarter. Toronto ended the quarter with a 12-2 run capped by a three-pointer by Vasquez and trailed 25-23 heading into the second.

DeRozan led the way with 15 points in a second quarter that Toronto finish with a 13-4 run, and when the Raptors all-star drilled a 32-footer at the buzzer it sent Toronto into the dressing room with a 55-50 lead.

A pair of free throws by Salmons gave the Raptors a 20-point lead -- their biggest of the game -- with just under four minutes to go in the third. But the Rockets finished with an 18-8 run to make it a 10-point game with a quarter to go.