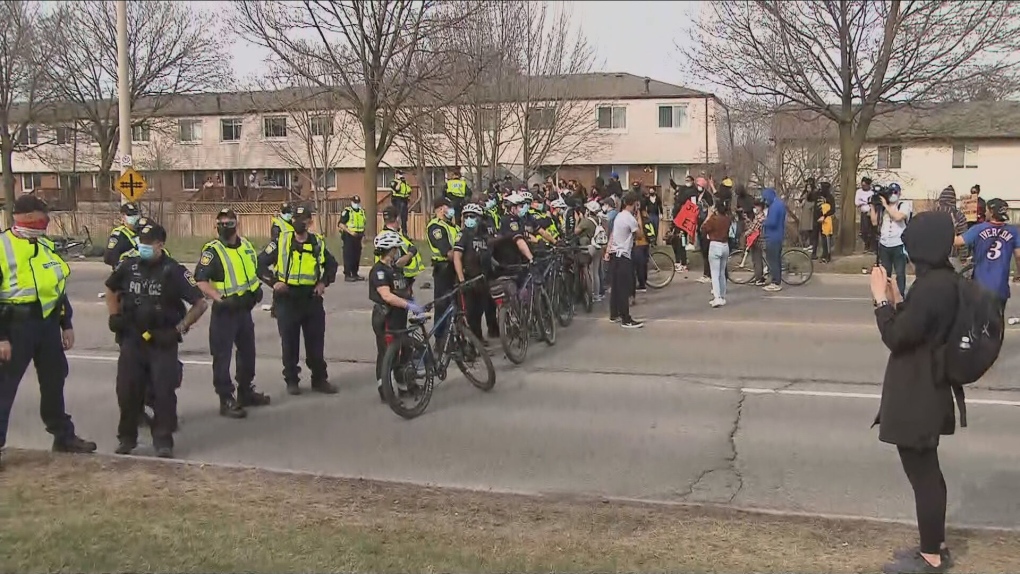 Peel police block protesters from marching to nearby train tracks.

TORONTO -- Peel police arrested seven people during a demonstration in Mississauga Saturday afternoon over the province’s police watchdog’s decision to clear a Peel police officer of wrongdoing in the shooting death of a 62-year-old man last summer.

Several people gathered at the intersection of Goreway and Morning Star Drives on Saturday afternoon to show support to the family of Ejaz Choudry, who was shot and killed by Peel police inside his apartment in June 2020.

Wayne Akan, one of the organizers of the protest, said the community wants justice for the family.

"We're trying to get the name of the officers because, as you see, the officers are continuously getting let off the hook no matter what the context of the case," Akan told CP24.

" And we need to get housing for these families. It's not fair that they're still in the same homes that the police came and literally destroyed, but yet they're the ones that have to stay back and pay for the damages."

Akan said they are going to occupy the intersection for as long and as frequently as they can until their demands are met.

After blocking the intersection, the demonstrators then began marching towards the nearby train tracks in an attempt to occupy them. However, before they can reach their destination, police blocked the road and began arresting people. 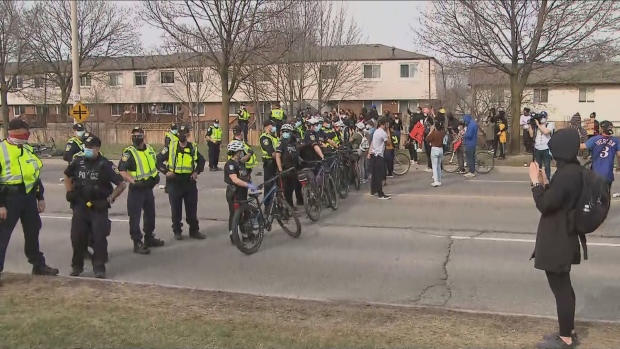 Police said they don’t want protesters on the tracks as they are concerned for their safety. They also don’t want the tracks to be blocked as trains carrying medical supplies use them.

“Our goal is to ensure that any gathering is safe, but also ensuring that all rules and regulations are followed. Unfortunately, this incident did deviate from a peaceful gathering, and six individuals have been arrested.” Police later updated the number of protesters arrested to seven.

The demonstrators then decided to return to the intersection of Goreway and Morning Star Drives where the protest concluded Saturday evening.

Police said the individuals arrested were taken to 21 Division in Brampton to be processed. Several people later showed up at the division and demanded the release of the protesters.

The demonstration comes days after the release of the Special Investigations Unit report into Choudry's death. SIU Director Joseph Martino wrote in his report that he's "unable to form reasonable grounds to believe any (Peel Regional Police) officer committed a criminal offence."

On the night of June 20, 2020, the family of Choudry called 911 after he refused to take his medication. Choudry was suffering from paranoia and schizophrenia.

The family later left the apartment and one of the first responding officers reported that Choudry was still inside and holding a large kitchen knife, the SIU said.

It prompted a larger police response, including tactical officers and a Punjabi-speaking officer to act as an interpreter.

Negotiations with Choudry were not successful, the SIU said. He informed an officer that he had taken his medication and police could not help him. He also told an officer that they would need a court order to enter his home. 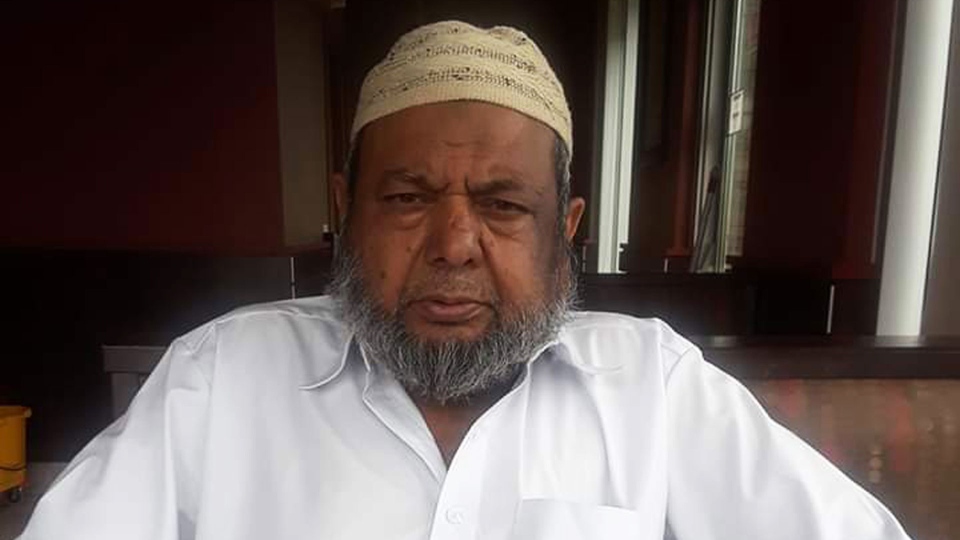 Just before 8:30 p.m., three heavily armed tactical officers were positioned on the balcony of Choudry's apartment. According to video footage obtained by SIU investigators, the officer who ultimately shot Choudry kicked the balcony door in.

Inside, the SIU said Choudry "had the knife extended towards the officers and immediately began moving in their direction."

The officers then fired a Taser, an ARWEN plastic projectile launcher and then two rounds from a handgun at Choudry.

The SIU said Choudry did not drop his knife after being shot and the blade was then kicked out of his hand by an officer after two more plastic projectiles were fired at him, something Martino called "troubling."

Martino said "the real question" arising from the incident was whether the officer in charge of the scene was right to order officers to enter the apartment after 20 minutes of not hearing from Choudry, or was that order "criminally negligent."

"The police were aware that Mr. Choudry was afraid of the police. Moreover, there is the real possibility that Mr. Choudry was unable to understand the officers as they did not speak Punjabi. On the other hand, the hope was that the element of surprise would prevent Mr. Choudry from taking defensive action and that the use of multiple officers would mean there were more 'less lethal' use of force options to facilitate a safe apprehension should circumstances turn volatile."

Martino said that concerns about the possibility Choudry would harm himself or was in medical distress warranted the decision to breach the apartment's doors and locate him.

The officer who shot Choudry declined to be interviewed and also did not provide his notes to the police watchdog.

The SIU is supposed to instill public confidence, Akan said, but its recent decisions are sending the wrong message.

"The clear message that you're sending to me is that, hey, if police have that kind of fatal interaction, they better make sure they kill us because if we survive, that's the only way that justice is going to be served," he said.

Akan said the community now wants answers from Chief Nishan Duraiappah and calling on him to come and talk to them.

"Come out here, chief. We need that report. We want to see what your line of rationale is."

Duraiappah released a statement on Tuesday after the report was published.

"I extend my heartfelt condolences to Mr. Choudry's family and friends," Duraiappah said. "The pain and grief felt in the community and within our organization has been profound. We recognize that more has to be done to support those in crisis, and police should not be the primary responders called upon to manage mental health calls."

-- With files from Chris Herhalt