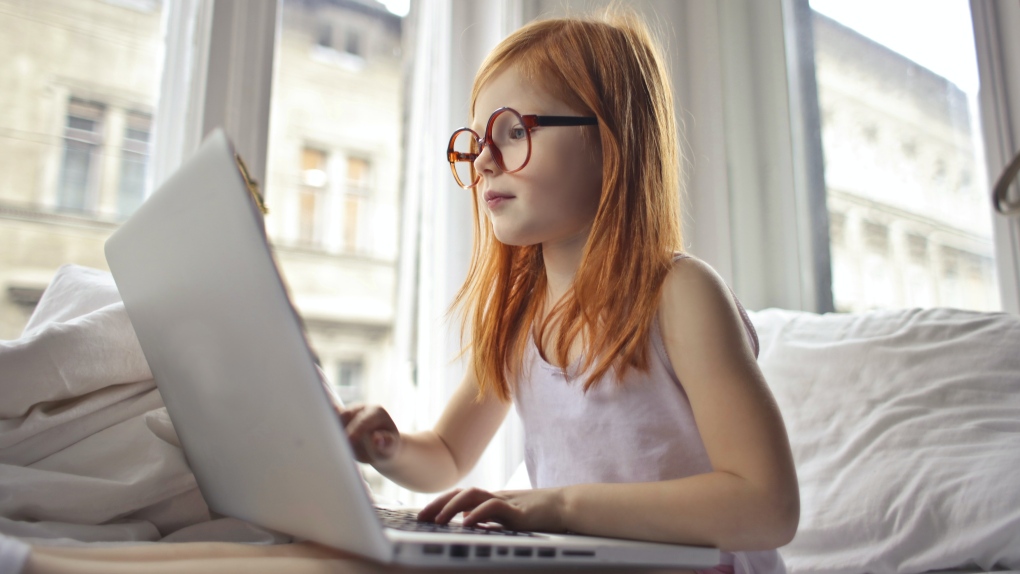 A child on a laptop is seen in this image. (Photo by Andrea Piacquadio from Pexels)

TORONTO -- A growing number of Ontario students are opting for online education in the coming academic year, prompting both school boards and universities to bolster their e-learning offerings in the face of rising demand.

Efforts to provide more online learning opportunities come amid an ongoing spike in COVID-19 cases across the province, with 313 new diagnoses recorded on Monday --the highest daily total on record in months.

The government said roughly 80 per cent of the provincial case load is concentrated in specific regions, primarily in and around Toronto, and several of the school boards seeing a spike in e-learning demand are located in the affected areas.

The Toronto District School Board cited rising enrollment numbers on Monday afternoon when ti announced it when it announced it was delaying the start of online classes until Sept. 22.

"Between Tuesday of last week and today, we have gone from approximately 66,000 students to more than 72,000 students in the Virtual School resulting in the addition of more than 200 virtual classrooms -- all requiring a teacher," interim director of education Carlene Jackson said in a statement. Canada's largest school board needed more time to work out the logistics of online schooling, she added.

The Peel District School Board, serving a hard-hit region just west of the city, said it's seen online course registration jump by 10,000 students over the past week.

In an update posted to its website, the board said it was delaying the start of virtual classes by one week in order to make staffing and timetable adjustments necessary to accommodate the more than 64,000 pupils now signed up for e-learning.

"These are truly unprecedented times, and we appreciate your patience and understanding during this transition back to school and as we navigate this new way of teaching and learning," the board said in a statement. "We remain committed to providing all students with a high-quality education, whether they are learning in person or online."

A similar surge is prompting delays at the Halton District School Board, which advised parents late last week that rising demand would push back the start of online classes by two days.

It said it was working through a "significant" wait list for virtual school and advised people who are currently attending in-person classes to continue doing so, as some online courses are full.

At the Kawartha Pine Ridge District School Board serving parts of central Ontario, meanwhile, officials worked to reassure parents that the logistical challenges posed by enthusiasm for online learning were well under control.

"Given the overwhelming interest in the virtual school, staff are working as quickly as they can to respond," the board said, noting more than 5,600 students across all grade levels are currently signed up for online classes. "The complexity of creating these schools and transferring student information has created technical challenges requiring additional staff and time."

Alex Bal, associate professor of new media at Ryerson University, said the interest in e-learning was likely driven initially by the ongoing uncertainty about the coming academic year. Parental concerns about course delivery and the lack of physical distancing measures, she noted, will likely be compounded in the weeks ahead if COVID-19 case numbers continue to climb.

"There's going to be a lot of chaos, and online learning became less chaotic somehow," she said.

At the post-secondary level, at least one university announced it would be sticking with virtual course offerings well into next year.

Hamilton's McMaster University, which opted to conduct most classes online throughout the fall, announced Monday that the winter term would look much the same.

"Every level of public health continues to stress the need to maintain physical distancing and anticipates the pandemic continuing for the foreseeable future," university provost Susan Tighe said in a letter posted to the McMaster website. "To keep our community as safe as possible, the winter academic term will be online with only a few exceptions."

The growing number of COVID-19 cases in Ontario now includes some tied to schools, according to a newly launched government website tracking the impact of the virus on the education system.

While the new site recorded one case each at schools in Mississauga and Pembroke, a handful of other boards have also confirmed cases within their ranks.

The Grand Erie District School Board said it learned of a positive case at an elementary school in Hagersville, Ont., while the Halton District Board said two students attending schools in Oakville and Burlington have also tested positive. Only the Burlington case, it said, poses an exposure risk.

The Middlesex-London Health Unit said five Western University students tested positive for COVID-19, noting they all had multiple interactions with people at downtown bars and restaurants.

More positive cases are expected in the coming days because of the number of contacts associated with the investigation, the health unit said.

This report by The Canadian Press was first published Sept. 14, 2020.