Crews continue to try and restore power to more than 182,000 customers across Ontario after a storm ripped through the province over the weekend, leaving at least 10 people dead.

The storm worked fast and furious, lasting only about an hour but leaving behind a path of destruction in its wake.

Eight people died during the storm on Saturday and a ninth person died in the aftermath on Sunday after being struck by a falling tree branch; although officials have not officially confirmed whether or not the incident was related to the weather event.

"Sadly, a 61-year-old Lakefield man has succumbed to injuries suffered during the storm," officials said on social media.

The majority of people who died were struck by falling trees; although at least one person was on a boat that capsized in the Ottawa River.

As of Monday afternoon, that number has been reduced to about 182,000 customers. Over the last two days crews have been working around the clock to try and clean up the knocked down trees and wires.

The hardest hit areas were Newmarket, Peterborough and Uxbridge. Fitzimmons said that nearly 800 hydro poles across Ontario were broken and four transmission towers in Ottawa had been knocked down.

"This is the most damage that they’ve seen on this level," Fitzimmons told CP24.

"We anticipate in some areas it will unfortunately be several days before we can get the power on."

Crews with Alectra, an electricity provider serving the Golden Horseshoe region, are focusing primarily on Vaughan where a number of poles “took a beating.”

Spokesperson John Friesen said the biggest challenge is the sheer volume of incidents.

“The storm ripped through our service territory all the way from Guelph, Hamilton through to Peel Region and hit York Region pretty hard and as you know some of the other areas across the province have received the same damage we did.” 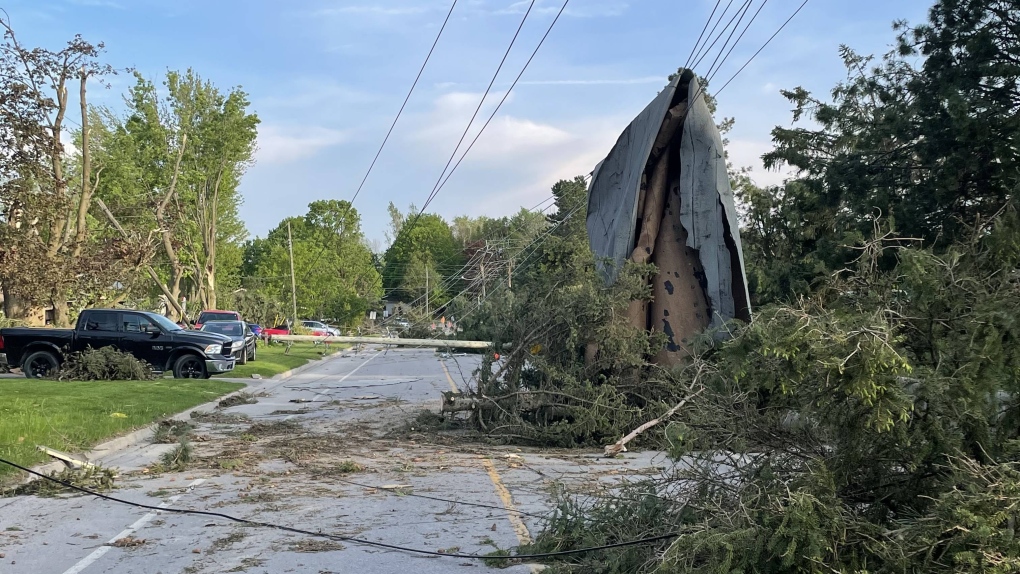 A power line in Uxbridge was destroyed in a severe thunderstorm on May 21, 2022. (Hydro One)

Friesen said that resources have been reallocated to areas with the most significant damage while also focusing on safety concerns.

As of Monday morning Alectra says there are about 45,000 customers still without power—of those customers about 32,000 are in Vaughan.

Meanwhile, Toronto Hydro says they have restored power to 96 per cent of customers whose electricity was knocked out during the storm.

“We are down to approximately 4,000 customers without power, but we know it is a difficult situation for customers and families that are still out,” a spokesperson said in a statement.

“Safety is still our number one priority as crews continue to respond to a number of public safety calls, and crews will continue to work around the clock until all power is restored. “

Hydro Ottawa said Monday that 110,000 of its customers also remain without power.

The man charged Tuesday with seven counts of murder for opening fire at an Independence Day parade in suburban Chicago legally bought five weapons, including two high-powered rifles, despite authorities being called to his home twice in 2019 for threats of violence and suicide, police said.

The Canadian Armed Forces (CAF) has released further details about what will and won’t be allowed under its revised dress code expected to be enforced starting this fall.

As passport processing delays and long lineups persist at Service Canada offices, the federal government is looking to buy 801 chairs for people standing in line by the end of this week.

With doctor shortages causing emergency rooms around the country to shut down, a northern Ontario hospital is scrambling to stave off the same fate.