A deaf Hamilton woman is hoping for change after she feels she was discriminated against while using a coffee shop drive-thru.

Danna Morales, 26, says she has been using fast-food drive-thrus her whole life without issue, until she visited a Tim Hortons on Sunday.

Morales says she showed the drive-thru cashier her order typed out on her iPhone, and after some fuss the staff reluctantly processed it. But when they neglected to give her some of the items that she had already paid for, she tried to explain that to them by typing it out on her phone.

The incident was recorded on camera by Morales’ partner Francis Mena, who was in the passenger seat.

Mena’s cellphone video shows the employee at the window refusing to look at the phone.

When Morales tries to explain the situation, the employee appears increasingly agitated.

“She didn’t need to have such attitude with me,” Morales told CTV News Toronto through an interpreter Wednesday.

“I think because of the way she reacted, it was a little discriminatory.”

The video shows other employees coming to the window and trying to assist.

“Go inside, I’m going to serve you,” says another employee.

“She can’t talk, she has to come inside,” says the main clerk at the window.

“She could have just read the order off the phone, given us our order and we would have been out of there,” Mena told CTV News Toronto, also through an interpreter.

“But instead she dragged it out and it made me feel a little hurt, a little uncomfortable.”

As the exchange continues, other drivers begin honking and one approaches the drive-thru window.

“Look at the line up here, I have to go,” a customer is heard saying in the video. “What is this?”

The employees eventually give Morales the rest of her order. 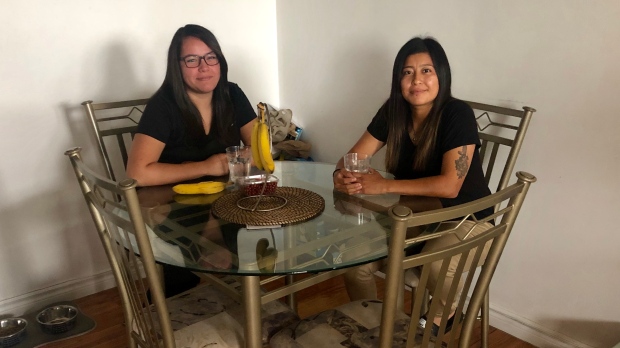 Morales and Mena returned to the location later that day with an interpreter, and they say the manager apologized and called the situation unacceptable.

Tim Hortons told CTV News Toronto in a statement the experience was “truly unfortunate” and does not reflect the company’s inclusive values.

“We want all of our guests to have a positive and welcoming experience at our restaurants. The restaurant has been working to rectify this,” a spokesperson said.

Morales says she would like to see more education for employees. Tim Hortons tells CTV News Toronto that it will be updating its accessibility training in light of Morales’ experience.

“How are we supposed to even order though a drive-thru when it’s a speaker system that’s inaccessible to us?” she said.