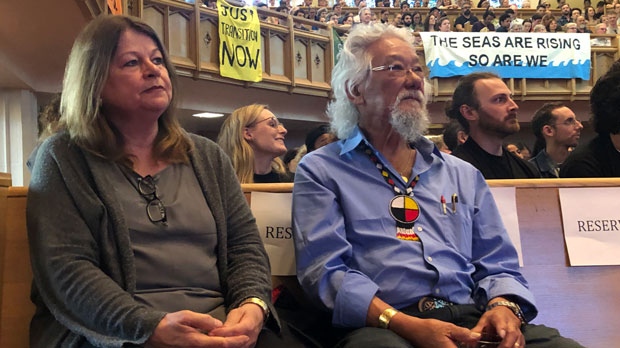 David Suzuki makes an appearance at United Church on Bloor Street on June 10, 2019.

Some of Canada’s leading environmentalists are trekking across the country to illustrate what they are calling global climate crisis.

Toronto marked the first stop on a seven-city tour for The Leap, a collective of prominent activists who are backing a Green New Deal, an ambitious U.S. plan to curb climate change and transform the economy by investing in clean energy jobs.

The movement is gaining traction among members of the Democratic Party in the United States.

Among those who were touting its virtues in front of a sold out crowd at United Church, located near Tuesday night were author and activist Naomi Klein and environmentalist-turned-broadcaster David Suzuki, who blamed the media for not properly highlighting the perils of planet-wide climate change.

“In May, the United Nations released a study saying we are causing a catastrophic rate of extinction threatening a million species of plants and animals,” Suzuki said. “The next day, Prince Harry and Meghan Markle had a baby and pushed everything out of the news.”

“Fundamental changes are urgent,” he warned, saying consequences to ecosystems, food supplies and economies will be dire by the year 2100 if global temperature increases aren’t capped to within 1.5 degree Celsius above pre-industrial era averages.

His sentiments were echoed by Pam Palmater, who works as a professor, lawyer and aboriginal rights activist.

“What will it take for people to wake up and realize we don’t need to just change things around the edges? Stop using plastic straws, yes! But that won’t save the world. This isn’t about who you vote for. The most irresponsible a citizen can do is vote and then call it a day.”

The next stop on The Leap’s cross country tour is Thursday in Montreal, with appearances scheduled to follow in Ottawa, Halifax, Edmonton, Vancouver and Winnipeg.